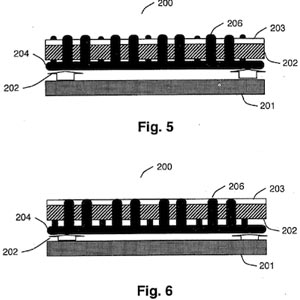 One approach is to provide tactile feedback mechanisms, such as dots, bars, or other shapes on all or many keys. In another embodiment, an articulating frame may be provided that extends when the surface is being used in a typing mode and retracts when the surface is used in some other mode, e.g., a pointing mode.

The patent was filed in August by Wayne Westerman, the founder of FingerWorks. Apple acquired FingerWorks in 2005 and has since incorporated its multi-touch technology into products such as the iPhone.

Placing your hands in a position for typing could be enough for the software to sense where your fingers are, display the keyboard, and push up the key edges in the appropriate location on the screen.