Those red numbered badges on the iPhone home screen can be helpful, indicating new text messages or unread emails. Sometimes they can be irritating, especially when there's no easy way to tell an app to stop nagging you with its badge. One example is the Apple firmware update, which will appear as a badge on Settings until you update iOS. 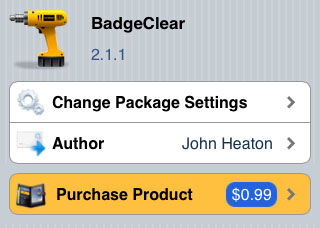 Jailbreakers know that updating iOS to the latest version isn't always a good idea if you're interested in keeping your Cydia apps and tweaks. Thankfully, developer John Heaton has created the BadgeClear tweak so that annoying icon badges can be easily wiped away. No options or settings are added to your iPhone by the tweak, just added functionality on the home screen.