A mysterious photograph has surfaced with evidence embedded in the file that indicates the image was probably taken by an iPhone 5. Further analysis of the reflection in the photograph shows someone holding the device that captured the image. To begin, let's just say that the folks over at pocketnow who revealed the image have a lot of time on their hands. 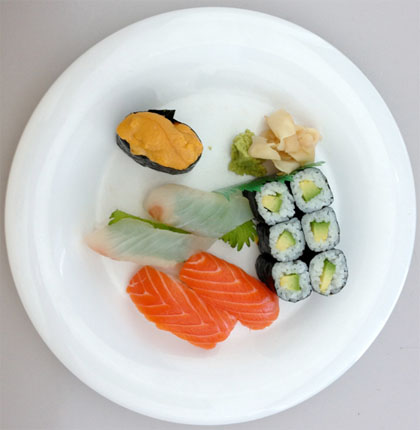 The image itself could be a plate of sushi from anywhere, but according to the embedded geolocation data within the original photograph, it was taken on the Apple campus in Cupertino, California. The photo was cropped to 2235 x 2291 pixels, while Exchangeable image file format (Exif) data in the file points to an original resolution of 3264 x 2448. This happens to be the magic number of eight megapixels at the iPhone-friendly 4:3 ratio.