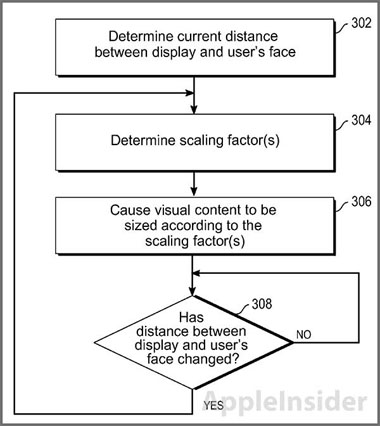 Zoom Mode
Using zoom mode would automatically make content larger on the iPhone as the device is brought closer to the face of the user. For applications such as Maps or certain games this would provide an intuitive way to get closer to the action or see details without having to touch the screen. Zooming out would be as simple as moving the iPhone further away. The mode could be invoked automatically depending on Settings in iOS for each application.

Comfort Mode
Comfort mode would provide the opposite effect. One example could be reading with iBooks. The object of comfort mode would be to keep the text at a comfortable size for reading regardless of how far the iPhone sits from the user's eyes. Moving the device further away results in the font size increasing to keep the text readable. Bringing the iPhone closer to the face would shrink the text dynamically to fit more content on the screen.

Both automatic zoom modes would require calibration, with the iPhone determining minimum and maximum comfortable viewing distances. These distances could be set by the user during an initial setup process when first starting up the iPhone. Even though technology including infrared proximity sensors and the like could be used to measure distance, the front facing camera could achieve the same result with face detection software. It's possible with the latter solution that even older iPhones with FaceTime cameras could be outfitted with automatic zoom capabilities in an iOS update.

i had a phone that raises the music volume when you press the function key on the side then raise it or the other way around it functions even on sleep mode. i bought the phone last 2009 i think the automatic zoom concept works the same. i think the concept will be fought over to because sony had used it even before there iphone 3