In the wake of what Steve Jobs referred to as "Antennagate," Apple has launched an informational website to follow up on its Friday press conference on the iPhone 4. Much of the smartphone graphics and testing facility photos presented at the event are explained in detail on the new Apple pages. Pictured below is one of Apple's 17 anechoic chambers, which accurately measure antenna and wireless performance. 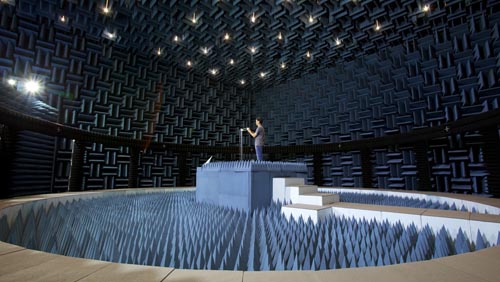 Apple highlights the fact they have spent thousands of hours logging tests in special facilities like these and in the field with prototypes of the iPhone 4 and all of their wireless devices. These state-of-the-art facilities cost Apple over $100 million to design and build.

Other details included on the Apple Smartphone Antenna Performance web pages show how different smartphone models compare to the iPhone 4 when held in the so-called "death-grip." The iPhone 3GS, BlackBerry Bold 9700, HTC Droid Eris, and Samsung Omnia II are all tested and video shows drops in signal bars when the devices are gripped around the antennas.

Apple's iPhone 4 is unique thanks to its external antenna, which exacerbates the problem but provides better sensitivity in low-signal strength areas. The location on the iPhone 4 where the worst attenuation occurs happens to be the lower left side of the iPhone 4, where two metal bands around the device are separated by a black line. Connecting these two metal areas causes a drop in signal strength.

Consumer Reports has verified that a case such as Apple's iPhone 4 Bumper will prevent skin contact with the antenna and reduce signal attenuation. As a result, Apple plans to distribute free cases to all iPhone 4 owners before September 30. If you have already purchased a bumper, Apple will refund your money instead of providing a free case.

The entire press conference can be watched from the Apple antenna site, and a link is provided to information about the iOS 4.0.1 update. The firmware launched this week and is available for free via iTunes. Apple has corrected the formula they use to convert signal strength to bars, and changed the size of the bars for better visibility.

Ahhh hell no he didn't compare his phone to blackberry and htc. I have the Blackberry 9700 and I turn it upside down, backwards, sideways and in my pants and it still gets no loss of reception. Hell I even dropped my Blackberry in the toilet and they sent me a new one. You think Apple warranties their phone for breaking or being Stolen? Hell no, their garbage and cocky a holes. If I'm not correct blackberry and HTC use dual atennas on their phones in which Apple is too dumb too figure out.