Looking for a way to sync your clocks and watch the ball drop in Times Square? Most people will just watch television, but now you can bring the whole experience to a new level with the Times Square Official New Year's Eve Ball App 2011. This free download is packed with features for your iPhone. 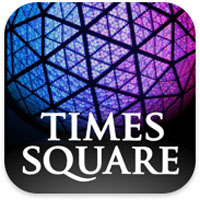 Not only is there a commercial-free streaming webcast of the event included, a countdown clock is synced to the ball and displayed in your local time zone. Assuming you're not in Times Square, you can measure how many miles away you are from the center of New York City's biggest NYE party.

Take and submit photos of your New Year's celebrations to be voted on by reviewers using the Times Square app website. Favorite photos will be screened live on the Toshiba Vision sign at One Times Square right underneath the Waterford Crystal NYE ball on December 31. The photos that are chosen will be featured live on television.

For those attending the Times Square party, the app is chock full of history information, news, photos, weather, a live entertainment and celebrity show schedule and maps to get you there. Social networking features are also included in the app, with Foursquare, Twitter and Facebook supported. You can even share photos and send "Kisses" to friends and family using the app.

NYE 2011 marks the first time the Times Square celebration has launched an official companion iPhone application. The app is available now via free download on the iTunes App Store.