The iPhone has mishandled another time change as clocks across the continent were set forward one hour this weekend to mark the beginning of Daylight Savings Time (DST). Reports have surfaced on Apple forums, Twitter and other venues of frustrated iPhone owners missing appointments and experiencing strange behavior on their devices. 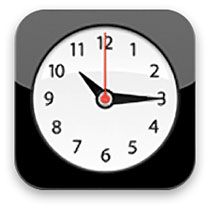 The DST bugs run the gamut from iPhone clocks jumping backward instead of forward by one hour, alarms going off an hour early, and phones switching to DST properly but later in the day undoing the change. Apple has not announced an official reason for the clock problems, but they are easily fixed.

To correct the DST clock issues on your iPhone, simply reboot the device. Alternatively you can turn on Airplane Mode then turn it back off. This will reset the connection to your cellular data provider. Typically the iPhone collects time data from the service provider to keep the clock accurate. The DST problems reportedly affected both AT&T and Verizon customers in the US.

The iPhone is no stranger to alarm clock bugs, with the most recent problems hitting users in the first days of 2011. Right after the New Year many alarms failed to go off at their scheduled time, leaving those without a backup alarm sleeping. Apple stated they were aware of the problem and working on a fix for the issue. The move to Standard Time in the fall of 2010 was also a rough one for the Clock app.

The time change to one hour earlier didn't take with any alarms that were already set. Many iPhone owners saw their alarms go off one hour late and had to delete and re-create repeat alarms on their devices. iOS 4.3 was just released last week, but it's not clear whether or not this update made the clock immune to the most recent DST problems. When all else fails, it's possible to manually set the time by navigating to Settings -> General -> Date & Time -> Set Automatically -> OFF and entering the time zone, date and time.

How many Apple engineers does it take to set the time on a cell phone?

Zero, we're too cool to do anything like that ;-)

None of the "fixes" has worked on my iPhone 4.

it did nothing to my iphone 4 either. iOS4.2

Ok so my alarm didn't work in the ne year at all despite the fact that I deleted all of my alarms and rest new ones. I reboot my phone as needed (3GS). After finally Gettin my time change to finally take I thought I'd try my alarm again bc my iPhone is really all that will wake me, well now it seems that even set on automatic with new alarms created it wants to go off an hour early every morning!!!! Also I acquired an error that says this accessory isn't optimized with this phone when I'm not actually using any and I lose all sound. All started 2011 and no fixes have worked!

I'm having this same problem right now! Lose all sound, can't control sound with the side buttons and have the same error. Still trying to figure it out.

After I turned off all the alarm clock repeats, it was fine. Rebooting the phone and turning airplane mode on and off did not work.

none of these fixes have worked for me. :( even tried hard resetting.

Try deleting your existing alarms add new ones. The clock should recognize the alarm since it is entered after the time change was set. Worked for me.

I hate my Iphone. Overpriced piece of junk!!

I deleted all my alarms and re-entered them, and now they work fine

deleted all my alarms and set new ones as well, still had it go off 1 hour early this morning. It may be glitched for all recurring alarms. Even if you set new ones.

>>deleted all my alarms and set new ones as well, still had it go off 1 hour early this morning. It may be glitched for all recurring alarms. Even if you set new ones.

Me too. I deleted the alarm and resetted it. This morning it went off 1 hour earlier again. I called the iphone tech support line. They said my phone is out of warranty and I need to pay $29 to get tech support over the phone on how to fix this issue. Can't believe that!

Yes I can because that is exactly what happened to me! It is their glitch and they cannot offer any help. The problem isn't with our phones individually like what a warranty would cover. The probelm is with THEIR PRODUCT!!!! Since this has happened in one manifestation or another each time there has been a time change and even on Jan 1st (where I don't know what their excuse was???) I feel they should be able to help those of us who are out of warranty!!! I am so sick of this crap!

I am experiencing same issues. Have reset all alarms..still going off one hour early. Called Apple they couldn't offer any help but "it should be better in a few days". Well that doesn't help me now. I can set onetime/ non-reoccuring alarm and it will work but If I set more than one only the first one works. I am getting a little sick of having this issue with this phone!

I concur.
Deleting, rebooting, and Airplane mode did not fix this issue for me either. I believe the problem is with repeating alarms.

Did the reboot thing, to no avail -- this advice does not fix the problem. This morning the alarm went off an hour early again, and then failed to go off an hour later after I reset the alarm. That's 3 fails in 3 days.

Right there with you all, had a crucial job interview, could barely get to sleep, damn phone gies off an hour early on Monday

You can design the amazing hardware, software, and OS... but you can't get a simple clock to move forward/back 1 hour?????

I have done it all. Turned off and on. Set airplane mode on and then off. Manually reset time and zone. I even reboot the phone. Still, repeating alarms go off an hour early!!

Yes, single-set alarms go off on time. No, I'm not too lazy to reset the alarm everyday. But laziness isn't the point... I pay way to much money every month for this phone not to work properly!

Looks like I'll be taking a trip to see those idiot Geniuses at the Apple store tomorrow. :(

I managed to get mine to stop going off an hour early by going to Settings: General: Date & Time: then switched the 'Set Automatically' from on to off. I live in California & have my timezone set to Phoenix Az.

thanks so much this fixed it for me. live in california too

just have to remember to turn it back in fall!

So irritating- I have the 3GS and I've tried everything you've mentioned but still continue to be woken up an hour earlier than necessary. Very frustrating- sent a tweet to @ATT and no response two days in a row. Sent an e-mail via their online site and no response for the last two days. This is a definite widespread customer service issue, not an isolated issue and needs to be taken care of.
Interestingly enough, my husband has the first generation iPhone and has had no issues. I guess sometimes improvements don't always make the product better.

Can`t stand this shit....waking up an hour early. Can Apple please fix this bug in alarm clock. My phone is a 3gs.

Turning it off and on again did not help. It still alarms one hour earlier than it is has been set.

I have an iPhone 3GS (iOS 4.1), I was told to update the firmware to 4.3 by Apple. He also said to delete and re-create all the alarms setting them to go off every day. I deleted the alarms, and recreated. No fixed. As for the firmware update, I have itunes 9.1, but I need itunes 10 to download the fireware. To get itunes 10, I need i OS 10.5+ on my computer. Which means I have to pay to update.

I'm a bit weary to update anything else, cause look where it got me with my phone. Basically I think this is apple trying to get everyone to pay for new software updates. I think it's going to backfire on them.

My boyfriends 3GS alarm won't work either. I tried rebooting, deleted current alarm and adding a new one, airplane mode on and off and turning off automatic in the time setting. Nothing has worked, any suggestions? Thanks!! :-)

STILL having issues with my alarm! Have turned off/on and airplane mode! NOTHING! For the $$ we've spent on this device, you would think the FUCKING clock would work!

ME TOO. I've done both of those options and my alarm STILL wakes me up an hour early. Fuck this.

None of these fixes has worked on my iPhone 3G. Now interestingly enough the alarm works fine if it is a one time deal. If I set my alarm for multiple days, it goes off an hour early. I have rebooted, re-synced, and tried everything known to man. What's up?