White and Black iPhone 4: What are the Differences?

Believe it or not, there are differences between the black and white iPhone 4 besides just color. Many have been waiting for Apple to finally launch this device in white after a 10-month delay. Now that the hardware is available, we can get a better idea of exactly what makes the hardware different in the two models. Apple has made some changes to make sure the white iPhone 4 functions the same as the black version. 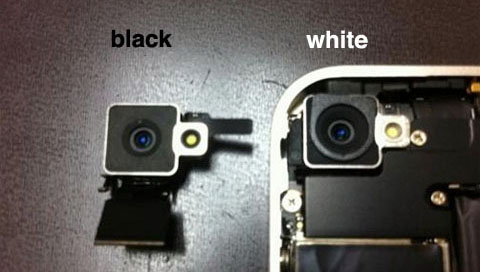 The photo above, highlighted by AppleInsider clearly shows a modification to the camera sensor. The right camera, from the white iPhone 4, is recessed further back than the black one on the left. Although the sensors are the same, this difference in distance on the white iPhone 4 camera lens looks to be a compensation for additional light passing through the back of the device.

Some who were privileged enough to receive earlier versions of the white iPhone 4 complained that glare and other issues with hazy photos were apparent on the device. The increase in distance between the back of the iPhone 4 and the lens seems to have corrected the problem. Another change that has been highlighted between the black and white phones involves the proximity sensor. This sensor is placed at the center of the iPhone above the display, and turns off the touch screen when the device is held close to your ear.

Apple's photos of the white iPhone 4 show a different opening above the earpiece, which could be to compensate for issues with the white glass color. The internal parts making up the proximity sensor have also reportedly changed, although more details have not been explained yet. Further breakdowns of the white iPhone 4 may clarify these changes or even find additional differences in the new model.

Finally, as was widely reported last week, the white iPhone 4 is 0.2 millimeters thicker than the black model. This change has not been explained or cited by Apple on its list of specifications for the iPhone 4. What has been explained by Apple executive Phil Schiller is that new UV coatings were necessary to protect the white device from sun damage. It's not clear whether or not this change is responsible for the increase in depth on the white version. The metal band that comprises the antenna is the same thickness on both devices, while it appears the glass is slightly thicker on the white iPhone 4.

The change in thickness has caused some tight-fitting hard cases to be extra snug or not fit the white model at all. Most preexisting cases will fit just fine, as 0.2 mm is not enough to cause a problem. As more white iPhone 4 hardware is sacrificed in the name of science, we're sure to find our about more internal differences between the two models.