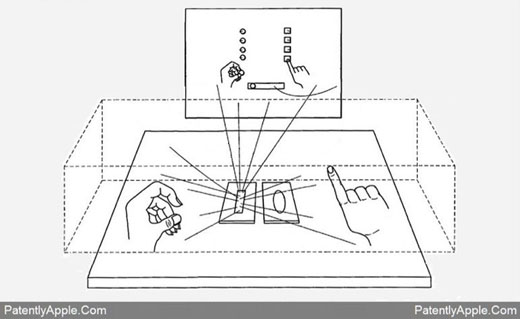 Scanning of the user's hands or head would take place continually using a receiver box, while another separate component would project virtual sliders or buttons etc. depending on the application. Apple has been already been known to be working on 3D holographic displays, and already has a related patent on that subject. The scanning beam would utilize a mirror much like they have at the grocery store checkout, except the beam would be infrared and not visible to the user.

Display is a whole different story, and three-color illumination could be combined with internal mirrors to make a static display appear three-dimensional. In addition, there's the possibility of projecting holographic imagery within the actual user input space. Apple specifically mentions the use of iPod touch, iPhones and iPad devices as extended displays that could be used along with the 3D imaging and display system.

As Patently Apple explains, Apple concepts such as a projection keyboard for iPhones and a built-in document scanner for iOS devices point to the company's movement in the direction of these advanced technologies. Making them portable, convenient and affordable seems to be Apple's overarching goal by widely deploying these features in future everyday devices.