You might think that wiping your lost or stolen iOS device would prevent another party from receiving messages via iMessage on the wiped device. As it turns out, Apple will be doing some work to issue a security update in future iterations of iMessage. 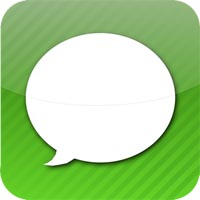 Users have discovered through an unpleasant trial and error process that the only way to stop text messages coming in via the iMessage service is to change your Apple ID. Wiping the lost iPhone and deactivating the phone number does nothing to stop a thief from receiving and reading your iMessages. These texts will be delivered to your old iPhone as well as the new one you just purchased to replace the lost device.

As of yet, Apple has made no comment on the issue according to ArsTechnica. Apparently changing your Apple ID should not solve the problem according to AppleCare representatives, but some have found it to work. Regardless the solution is inadequate since changing your Apple ID renders all of your previously purchased music and apps completely useless thanks to DRM controls.

If you are currently using iMessage to communicate with your fellow Apple fans, be on the lookout if your device happens to go missing. There won't be any way to turn off iMessage on the lost iPhone because, well, the device is lost. Unfortunately, wiping the device will not erase it as a destination for all of your iMessages from other users. All iOS users can do is wait for Apple to issue an update correcting the problem. In the meantime, don't lose your iPhone!

I currently have an iphone 4 that I have owned out of the box. I had deactivated it back in November, but recently I have been receiving text messages between wto people. I see both sides of the conversation and have no idea how this started. I continue to use the iphone for apps, internet, and music over wifi but I have not used the Messages or Phone app since November. I called the Apple genius's and had me do some reset. We'll see if that works. Just fyi you are really blind if you think your conversations are private when using imessage.