Your iPhone probably won't have a made in the USA tag anytime soon, however supply chain sources have indicated that one important component is now manufactured just a day-and-a-half drive from Apple headquarters in Cupertino, California. The brains of the iPad 2 and iPhone 4S, the A5 processor is now produced by Samsung at a facility in Austin, Texas. 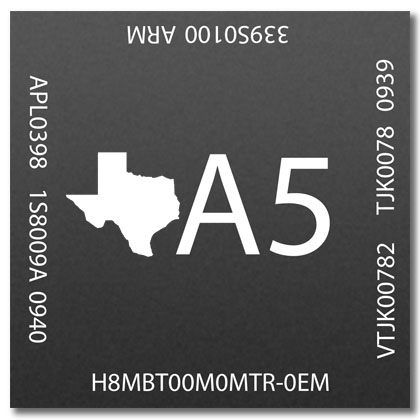 Sure, the devices are assembled in China and many components come from Asian suppliers. This doesn't change the fact that Samsung has moved its Apple A5 production to the US. The previous generation processor, the A4 was manufactured in Asia.

Samsung's production in Texas is said to be almost entirely to fill orders from Apple. The A5 system-on-a-chip (SOC) provides not only the processor but graphics hardware and system memory as well. If Apple continues to source these SOC units from Samsung, it's likely the next-generation A6 processor debuting in the iPad 3 will also be fabricated in Texas.

Samsung's facilities are said to be an almost $9 billion investment, the largest of their kind in the state. With 1.6 million square feet, Samsung employs 1,100 people to produce the A5. The company also operates a facility that manufactures NAND flash memory in the same vicinity. Texas is not new to the electronics game, as Texas Instruments was the first company to build the silicon transistor and the integrated circuit.

Interestingly, despite their supplier relationship Apple and Samsung are still at odds when it comes to several patent battles. They continue to do business as partners as the lawyers battle over similarities between their products and try to prevent sales of the opponents products in specific countries. Maybe someday Apple will be able to stamp assembled in the USA on their mobile devices, but we're not going to hold our breath.