MyAssistant Siri Tweak to be Updated With New Features and Fixes

MyAssistant is one of the more popular jailbreak tweaks that allows you to do all kinds of great things like change Siri's background and create custom conversations. Co-creator Andrea Oliva announced on Monday that the tweak will be receiving an update to add even more features and a few bug fixes. 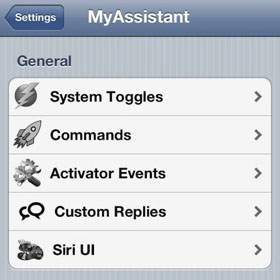 Version 1.1 will give Siri the ability to download, open apps easier and send tweets. Most of these functions are available for Siri via other jailbreak tweaks, but MyAssistant delivers them all plus more for the low price of $0.99. Check out the complete list of changes and fixes below.

If you don't wish to spend the $0.99 you can download AssistantExtensions which also launches apps, YouTube videos and so on. CustomSiriBackground allows you to wallpaper Siri with any picture in your Camera Roll, and Sireet allows you to send Tweets using Siri. However, these are only a few of the features offered by MyAssistant. To get all of these Siri tweaks plus more download MyAssistant from Cydia, in the BigBoss repo. You can upgrade to version 1.1 for free once it's released.