Just in case you needed some more spare parts for your nonexistent iPhone 5, SW-Box.com is here to help. The site is selling a silver replacement SIM card tray for the iPhone 5 brand new priced at $2.92. 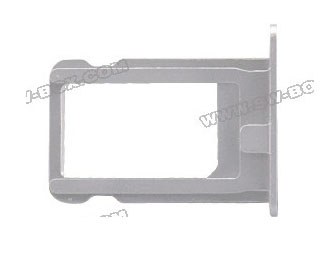 Believe it or not, the SIM tray does show some differences from the iPhone 4S version, which has led some to believe the part is genuine. Should this be true, it's clear that a newer, smaller nano-SIM design will not be ready for prime time when the sixth generation iPhone goes into production.

Although the tray has some slight differences in shape, it's clearly designed for the current micro-SIM configuration. Apple has been fighting to get its own nano-SIM design approved as the official standard. It's not clear what material from which the iPhone 5 SIM card tray is made. Some sources in the supply chain have said Apple will use liquid metal to form the body of the next generation iPhone.

The iPhone 5 SIM card tray features the same flat exterior-facing edge as the current iPhone 4S tray, which could mean that Apple has no plans to move to a tapered side on the next iPhone. When it comes to the differences between this part and the current iPhone 4 SIM tray, they are subtle. There's an extra, small shelf not seen on current SIM trays and a slight bend in the metal frame that makes up the tray.