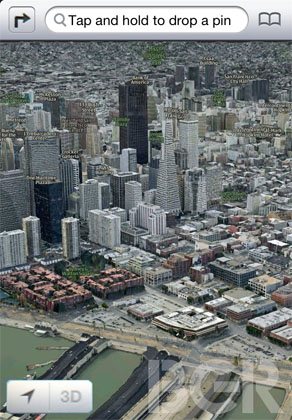 Apple has acquired more than one mapping company over the past few years, with rumors of an Apple Geo Team surfacing as early as 2009. It's clear that the company has big plans up its sleeve for iOS mapping in the future, as evidenced by mapping patents that include augmented reality features.

Apple's most recent acquisition in the field was C3 Technologies in 2011, specializing in advanced 3D mapping much like we see in the screenshot above. Thanks to sources at BGR, we now know that Apple is testing their 3D mapping software with build 10A3XX of iOS 6.