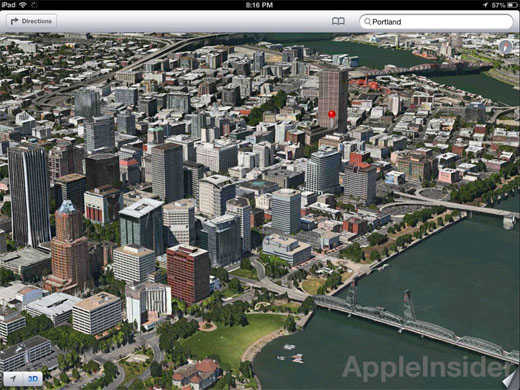 What's cool about the Apple-devised Maps application in iOS 6 is that there's even a wireframe 3D mode, allowing viewers to see buildings and streets without the intensive graphics of an aerial photograph being laid over the 3D model. Switching from 3D to a normal overhead map is simple with buttons built into the application. Ever since Apple began developing its own native iOS mapping application, speculation has been rampant as to whether or not Google would come back with a stand alone mapping app for iOS.

Apple risks looking bad if it rejects a Google attempt at 3D maps, however the fact that Google is getting kicked out of a key role on iOS in the native Maps app is significant. If Apple can pull off these incredible vector and 3D aerial photography maps on the next generation iPhone, Google will have a serious competitor in town. Apple will also make its 3D mapping available to third party developers, giving Apple maps in iOS the upper hand.