What This New Battery Means for the iPhone 5

Although these next generation iPhone battery photos from 9to5 Mac may not be much to look at, they give us some more insight into the iPhone 5 hardware coming this fall. With a larger display and an LTE radio, the iPhone 5 will require more power in a slimmer package. 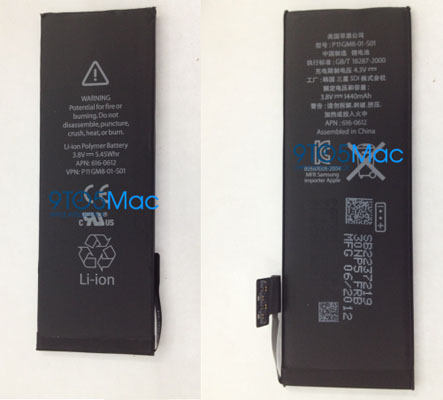 Assuming Apple goes with the battery pictured above, the component is slightly thinner and increases capacity to 1440 mAh over the iPhone 4S at 1430 mAh. Voltage is also increased in the new battery from 3.7 to 3.8 volts. As it turns out, these increases are not as large as some were expecting to see.

9to5 Mac speculates that Apple has done a good job at reducing power consumption to keep the battery size and capacity in check. The iPhone 5 dual-core processor is likely optimized to run the LTE radio efficiently, so a larger battery isn't required. If Apple has decided to use the latest Qualcomm Gobi chips this would help reduce power needs as well. Other tweaks in iOS 6 and in the hardware design could also stretch battery life in the sixth generation iPhone.

This battery model is stamped with a manufacturing date of June 2012, which puts the component right on schedule for assembly and a new iPhone release this September. In the past, Apple's engineers have ensured that battery life remains level or improves with each new device, despite additional features such as higher resolution screens and faster processors. Firmware updates have caused battery issues for some users, however there are many tips and tricks you can use to extend your iPhone battery life.