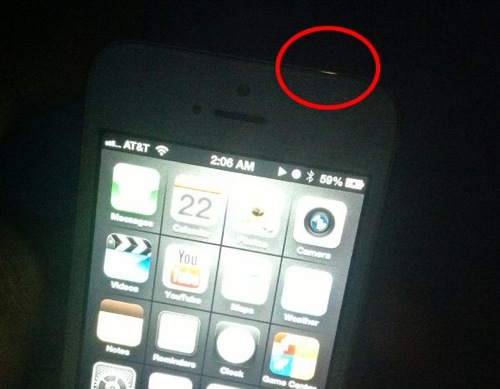 BGR noticed their white iPhone 5 is also suffering from the light leak problem:

"BGR has confirmed on one of its own units that there is indeed a small crack on some new iPhone 5 units located just below the power button. It’s uncertain at this point if the issue is an isolated one that affects only some iPhone 5 models or if it’s actually a widespread defect.

The light leak is only noticeable in "low-light or completely dark situations," according to BGR. Some iPhone 5 owners have reported that they have received replacement models from Apple Stores, however, one user said the replacement phone suffered from the same problem.

Its a widespread issue. I have contacted a local Apple store and all their displays and open white iphone 5's show this same defect. I had it replaced once and replacement showed same issue which is why they investigated all their phones. they advised they wont replace under warranty now because it is within their tolerance levels and replacing it will not resolve the issue.

God People Are So Picky...It's Not A Problem If It Still Works Fine....It's Only A Problem If You Make It Into One

Android users (not that I'm saying you are one) may put up with stuff like that because they don't pay as much and don't expect as much build quality for their devices. However, Apple hardware users pay an awful lot for their devices and so have a right to complain if their devices aren't perfect. I've got a black iPhone 5 and there's a small area where the paint is running off on the bottom. I'm freaking out about it because it's not perfect any more. So yes, light leak would be a problem for a lot of people. In fact, light leak really sucks.

Your definatley right about one thing in that whole statement, Android users do not expect the same build quality as a iphone, they in fact expect far superior quality the kind of quality that they pay for, unlike apples phones which have consistently been released with major design flaws and technology that is outdated before it even hits the shelf and all at a ridiculously inflated price i mean seriously who in there right mind would pay more for something that is poorer quality and made with outdated technology,i mean really think about it that's the equivalent of me for instance going into a car dealership and saying to the salesman give me that car there that's two years older and has less features and while your at it how about you charge me 20% more for it than that brand new car with far better features and technology just because you can, i guess really what it comes down to at the end of the day is that apple is good at one thing and one thing only, and that is quite simply brainwashing a bunch of mindless twats into thinking that they actually sell a decent product simply because it costs a lot of money.

hahaha, almost all of the android users say that bullshit, but lets face it, ou pay a lot more, but it works, not only with iphones, but also with the macbooks, a lot of my friend got macbooks, and i've never heard, or seen any problems, but with windows, there are allways problems, alsof, with android, you can do 'whatever you want' well, that's nice and all, but if you do one thing wrong, your whole phone is fucked up :P and howmany of the android users actualle do something with the os? also, the android phones get slower quicker, one of my friend bought an android phone, which was "state of the art" at the same day as i bought my iphone, and he can't even open email's with photos in it.. soo, it may be expensive, but it does work..
this is my opinion, you can keep buyin' android products, but i reccomment apple, because in the future it will be cheeper because it lasts longer.
grts
not an apple fan, but just lookin' at my wallet..

Please feel free to enlighten me on all the supposed problems that windows pc's and android phones have because qite frankly i know 10 times as many people who have windows pc's and android phones and let me tell you i havent heard a single one of them complain about any problems, the few people i know who have owned apple products, acttually to be truthful i dont know any people who use apple products any more )with the exception of say an ipod) because they have all gotten fed up with the ridiculously inflated price that apple charges for products that work half as well as a product that costs half as much. and i will let you in on a little secret want to know why apple products cost more, quite simply its because they buy all the technology in there products off of other companys (ie samsung) yeah you heard right apple buys parts from there biggest competitor shows how great and origional there over priced technology is

Your wallet would be great if Apple users kept the same phone for more than a year instead of going out and buying the new one and blowing more cash on a model that is not all that much better.

Haha, learn a little before you speak. Android phones are not windows os. They run off of linux. As someone who specializes in computer programming and network, I will not touch a mac computer or an iPhone if there are issues (which every person I know with one has asked) they come out with a new iphone so often, its all outdated. All that aside, if you want the iphone for there not free apps, then have fun with that, you can pay a little less for an android, for a better os, better overall performance reviews and you can get all the apps iphone has but for free. So who is being smart with their money now?

As someone who ''specializes in computer programming and networking'' you should know when to use their instead of there.

Wot a Twat! couldn't think of a witty retort?

He/she's an expert in programming and not in grammar. duh!

To All, who ever say Apple releases new phone every year..
Howmany phones Samsung releases in a year, it releases a hell lot more than Apple, still people wont cry on that

To All, who ever say that Apple phones are costly...
1) Samsung phones use Andriod which is open source and free (obiviously Apple is spending more money on their dev team to build iOS and their updates)
2) Samsung dont invent, they just copy from Apple (infact all other smart phones copied models from Apple)
the phones which didn't copy Apple model, didn't survive (Nokia and BlackBerry classic examples)
checkuout recent copy-right cases
3) Apple device quality would be extraordinary (apple used to buy only processor and other chips from Samsung, not the design)
If u think in that lines, then Samsung chip manufactuing company and the phone manufacturing are not one and the same ( i mean internally)

To All, who says Apple products are not best (or of quality)...
how many of u are using Apple devices? (i hope this answered ur question)

@androidfanbois you're a bunch of knob jockeys... They may be state of the art for five minutes, but they don't retain their value worth a damn like apple products do, my iPhone 4S will sell for $400 used on eBay in a few days, whereas a droid x released after the 4s is now worth about $46. My MacBook Pro from 2010 has a current auction value of over $1000... You can't but a Samsung ultrabook today and sell it for that tomorrow... So shut your mouth you know nothing twits!

Fuck you. And fuck Apple. There's no better argument to simplify what you deserve to be hearing. It is like that because Apple gimmicks are fucking expensive to start with. That's why it doesn't "devalue". Not an awful lot of people are buying Apple products in comparison to people buying more economic devices. And Apple stands for most expensive, not for best product. Deal with it.