Angry Birds fans will be happy to know their favorite game has 25 new levels. Every few months developer Rovio Entertainment expands the lineup of themed Angry Birds Seasons levels and adds them at no additional charge. The Winter Wonderham update brings the total to over 300 levels! 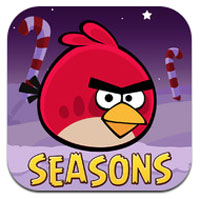 Winter Wonderham features a snowy winter landscape with the aurora borealis, and each day leading up to Christmas means a new level will be unlocked. Newcomers to the game can still purchase Angry Birds Seasons from the App Store for only $0.99.

Besides the new level challenges, there's a new ice element that means your birds will slip and slide. There are also three secret levels that you can find to unlock special wintry treats. Not only this, but Angry Birds Seasons will feature a special Harbin level to mark the opening of the Angry Birds area at Ice and Snow World in Harbin, China.

Rovio also announced the Angry Birds Friends Winter tournament taking place during each week in December. Angry Birds Seasons is compatible with iOS 4.3 or later and is optimized for the iPhone 5 display.