Apple officially released its Q1 2013 earnings report, and put an end to speculation that demand for the iPhone and iPad is low.

Apple CEO Tim Cook addressed recent rumors that iPhone and iPad production has slowed due to a decrease in demand. Cook explained using order cut “data points” is not an accurate way to determine what is happening inside of Apple. 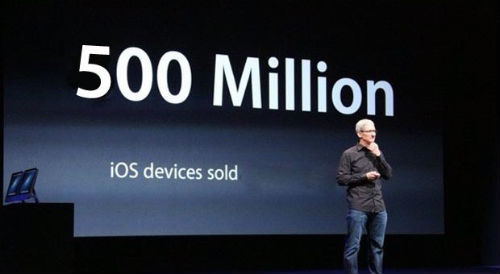 “It’s good to question the accuracy about any rumor regarding build plans," Cook said. "I'd stress that even if a particular data point were to be factual, it would be impossible to interpret the effect on our business. Our supply chain is very complex... there's a long list of things that would make any single data point not a great proxy for what's going on."

“We’re thrilled with our outstanding results and record-breaking sales of iPhones, iPads and Macs,” said Cook. “Apple’s momentum is incredibly strong, and we have some amazing new products in the pipeline.”

Even though Apple posted a record $54.5 billion in revenue, and set a company record for iPhone sales, it still fell short of Wall Street projections. AAPL is down some 5% in after-hours trading due to analysts’ low predictions for the next quarter, and the recent rumors of weakening demand for iOS devices.

Apple’s Board of Directors has declared a cash dividend of $2.65 per share of the Company’s common stock. The dividend is payable on February 14, 2013, to shareholders of record as of the close of business on February 11, 2013.

“We’re pleased to have generated over $23 billion in cash flow from operations during the quarter,” said Peter Oppenheimer, Apple’s CFO. “We established new all-time quarterly records for iPhone and iPad sales, significantly broadened our ecosystem, and generated Apple’s highest quarterly revenue ever.”

Apple is providing the following guidance for its fiscal 2013 second quarter: