A new iOS gamebook that utilizes the popular choose your own adventure format is getting rave reviews from both critics and app users. The new app is based on the 1983 Fighting Fantasy series Sorcery! written by Steve Jackson. The app is an interactive game/book that utilizes inklewriter technology to change the story around a user's choices while he or she is playing along. 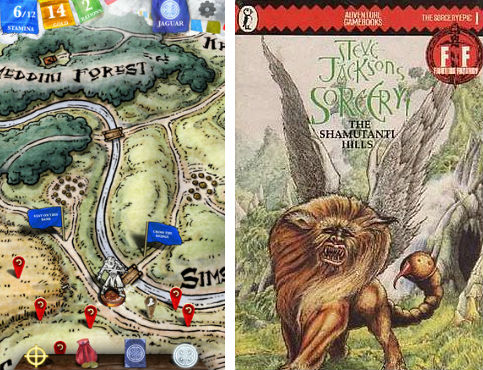 The reader must make decisions based on a real-time story. The book's text and story line changes based on how the reader reacts to certain situations, and by what they do in combat. For example, players can choose to engage other characters or avoid them, and decide what towns to visit and what paths to take. Users can also cast spells and rewind the story if they don't like their decision or accidentally die.

Critics and users are calling Sorcery! "refreshing and unique", and seem to be enjoying the gameplay and new character art by Eddie Sharam. The interactive map for Sorcery! was created by Mike Schley from Wizards of the Coast, and the music is by David Wise (Donkey Kong Country). The app also features original illustrations by John Blanche.

Sorcery! is available from the App Store for $4.99. It's compatible with all current iOS devices and requires iOS 5.0 or later. Here is an example of what you can do in the game via the official App Store description:

+ Plot your own journey across a hand-drawn 3D world map
+ Fully interactive story, with 1000s of choices
+ The story is rewritten on the fly based on how you play
+ Unique touch-based sword-duelling, with procedurally-generated descriptions of the action
+ Outwit monsters by learning their weaknesses and tells
+ 48 magic spells to master, with weird and wonderful effects that change the story