An image of what could be packaging for Apple's rumored low cost, plastic iPhone has popped up online. The alleged photo came from the Chinese WeiPhone forum (via CNET). The image shows a pile of iPhone 5C boxes, with an odd logo that looks like it could belong to a Chinese Apple knockoff. However, the new logo could also be part of an updated Apple design to fit in with the revamped look of iOS 7. 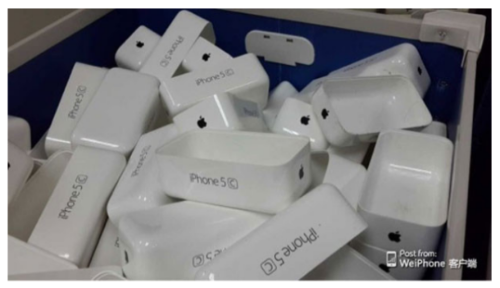 Apple is expected to announce the successor to the iPhone 5, dubbed the iPhone 5S by the press, alongside a budget iPhone this fall. Rumors have suggested that the plastic iPhone will be available in an array of rainbow-like colors like the iPod touch. The leaked image of the alleged budget iPhone packaging also has an iPod-like feel.

Some analysts believe Apple plans to release a lower-cost iPhone to meet the growing demand for more affordable smartphones. Jefferies analyst Peter Misek has predicted that Apple will split its production of around 25 million to 30 million units between the iPhone 5S and plastic iPhone in 2013.