Unlock the iPhone with a Virtual NES Controller

Passcode unlock modifications for iOS are nothing new. Examples such as PatternUnlock and Stride provide entirely new ways to unlock the iPhone. Now with Control Unlocker a virtual NES-looking video game controller brings the passcode unlock back in time. 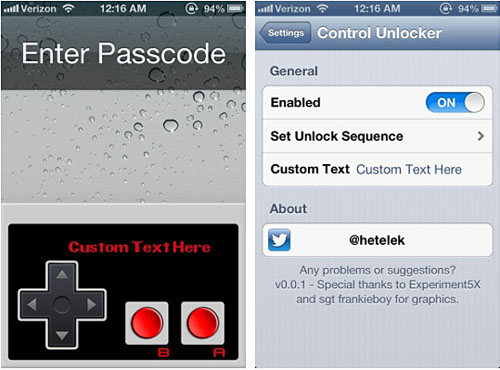 Even though there are no Select or Start buttons, combinations using the A and B buttons along with the D-pad can be used to lock and unlock. In its current iteration, Control Unlocker is mostly for fun. If a stock passcode is enabled, unlocking will involve entering the game pad combo followed immediately by the actual passcode.

Besides a toggle to disable the tweak entirely, the text appearing on the virtual game controller can be customized. To set the unlock sequence, simply navigate to Settings -> Control Unlocker -> Unlock Sequence and tap Clear Sequence. Enter the new series of move combos by tapping the buttons. One big caveat when it comes to security, the Control Unlocker can be bypassed with a pinch gesture directly on top of the controller.

Warning: the Konami code "up, up, down, down, left, right, left, right, B, A" will not secure your device against prying NES fans!

Control Unlocker is available on Cydia from the BigBoss repo free of charge. Check here for instructions on how to jailbreak iOS 6.x with evasi0n. You can also find out how to purchase and install Cydia tweaks with this guide.

If anyone interested I have done my iphone factory unlock from http://www.unlock2go.com