Two of the Samsung Galaxy S4's signature features are Smart Pause and Smart Scroll. Smart Pause automatically stops a video when a user looks away from their display, or puts the device down. This is a great feature when it works properly, and now iOS users can get in on the action. 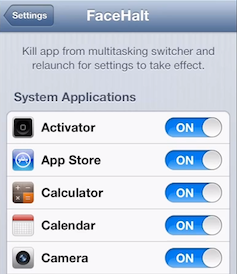 A new jailbreak tweak called FaceHalt will perform the same function as Samsung's Smart Pause on your iPhone or iPad. According to the official description, FaceHalt works with most video applications, except apps with custom implementations like VLC. It supports the fifth-generation iPod, iPhone 4S, 5, iPad 2, 3, 4 and mini. Support for the non-supported applications is also coming soon.

You can activate the tweak by going to Settings > FaceHalt and enabling the apps you want it to use. Once enabled, FaceHalt will automatically pause and play videos from all your supported and activated apps. You can also double tap any video to manually pause a it, and give it a single tap to restart.

You can download FaceHalt for $2 via the BigBoss repo in Cydia.