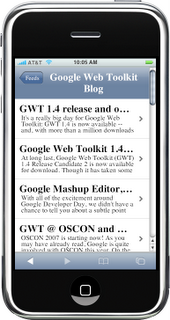 the iPhone interface. Text is sized appropriately, the interface is relatively peppy, and iPhone-esque effects such as "sliding" new screens in and out are used. The interface will be familiar and comfortable to most users.

The availability of Google Reader for the iPhone will be good news to many users who have been frustrated with the options for reading RSS on the iPhone. Though Apple offers a web version of their .Mac RSS reader on the iPhone, the lack of a centralized interface and certain UI issues have been criticized by many.

Google Reader for the iPhone brings a bit more to the table. Feeds are managed centrally through the AJAX interface. New feeds can be added and removed through the interface as opposed to the .Mac reader which requires navigation to the RSS feed in question and the addition of a .Mac reader bookmark.

One terribly annoying, at least from our perspective, .Mac reader UI quirk not is thankfully not found in the iPhone Google Reader. When scrolling through a list of feed articles, and selecting to read the full article summary, Google Reader for the iPhone returns you to the article in the list that you expanded. Annoyingly, the .Mac reader always returns you to the top of the RSS article list.

You can read more about Google Reader for the iPhone and the Google Web Toolkit here.

Here is the direct link to Google Reader for the iPhone.