Dealing with multiple group messages in iOS 7 can be frustrating, especially if several of the messages include some of the same contacts. The stock Messages app simply identifies group messages by listing the names of the participants. Now thanks to the jailbreak tweak MessageRenamer7, there is a better way. 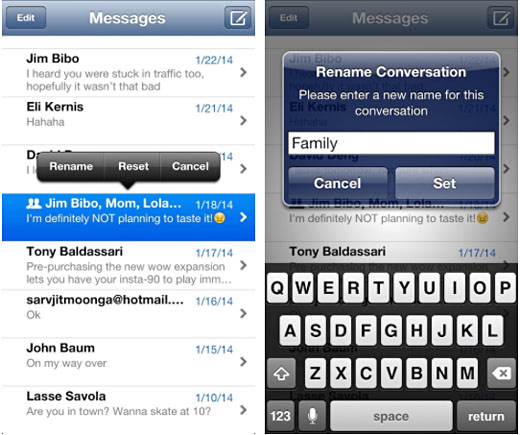 Once installed, MessageRenamer7 provides the option to rename a group message, directly in the Messages app. Hold down on any group message and select Rename from the pop-up menu. A text field will be provided to enter a new name for the conversation. Tapping Set will make the change.

Besides helping to keep the Messages app more organized, this tweak is nicely integrated into iOS. The previous version, MessageRenamer is available free for devices up to iOS 6. For the latest iOS 7 version, developer Atlas Wegman is asking $0.99. Not only does the updated tweak provide iOS 7 and full 64-bit compatibility, but the software has been completely redesigned and optimized for better performance.

And don't worry, if you need to remove a name and restore the original conversation title, MessageRenamer7 includes a Reset option that will wipe the edited name and restore defaults. Ultimately, the stock Messages app may take the hint from services such as Facebook Messenger and allow group message renaming in the future. For now, MessageRename makes this possible, and even works with biteSMS.

MessageRenamer7 can be found on Cydia in the BigBoss repo for $0.99. Look here for instructions on how to jailbreak iOS 7.x with evasi0n 7. You can also find out how to purchase and install Cydia tweaks with this guide.