Create Notes from Anywhere in iOS 7

Notes are a convenient way to keep track of lists and other items on the iPhone. Even better is the ability to sync notes to a computer using iCloud. Developer JGTweaks has improved stock iOS notes even further, by making it possible to create a note from anywhere on the device. 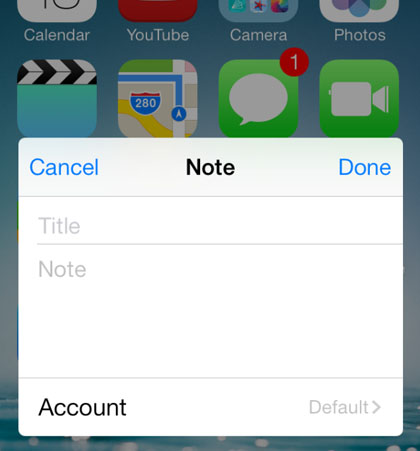 No more pausing to stop what you're doing, and having to navigate to the Notes app. Jailbreakers can install the NoteCreator tweak from Cydia and choose any Activator action to create a new note. When the action is performed a dialog box appears, prompting the user to enter text for the note. Tap Done and the note is saved to the default account.

To associate NoteCreator with an Activator action, both tweaks must be installed. From Settings -> Activator choose a gesture such as Slide in From Screen Left or Home Button Triple Press and assign it to NoteCreator. Next time this gesture is performed the Note dialog box will appear.

NoteCreator is compatible with iOS 7 and 64-bit devices, as well as iOS 6. The tweak has been translated into several languages, including Chinese, Italian, Greek, German, Norwegian, Polish, and Spanish.

NoteCreator can be found on Cydia in the ModMyi repository free of charge. Look here for instructions on how to jailbreak iOS 7.x with evasi0n 7. You can also find out how to purchase and install Cydia tweaks with this guide.