While the name might not sound pleasant, Weasel brings jailbroken iOS users a new way to seek information and search their devices. Frequent users of Spotlight will find that Weasel enhances the experience, adding more functionality. Weasel can also be invoked from anywhere after being assigned to an Activator gesture. 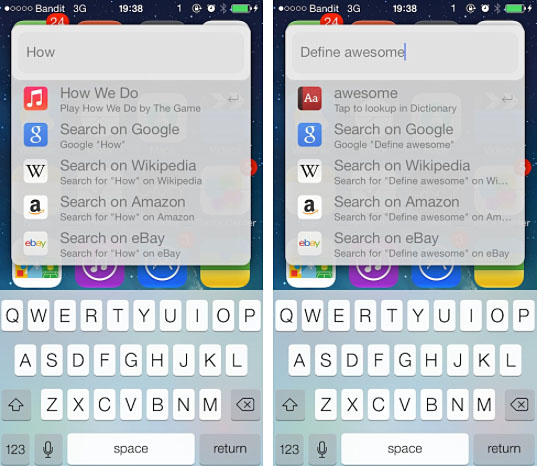 So what is Weasel capable of doing? When activated, the tweak brings up a text box and keyboard. When a search term or command is typed the magic happens. For example, if the search term that's entered matches a song in the Music app, shortcuts to play the track appear. Options to search for the term on Google, Amazon, Wikipedia and eBay also pop up.

Choosing one of the search options automatically launches the search in Safari. Weasel is also capable of recognizing commands. Enter the command Define followed by a word, and options to look it up in the iOS 7 dictionary or on the web appear. System brings up another list of shortcuts, such as Respring, Reboot, Turn off Bluetooth and the like. One tap will execute the system command.

Weasel even does calculations, which can be copied and pasted into other apps. Of course, if a search term brings up apps they can be launched, and Contacts can be viewed by tapping the name directly in Weasel.

Weasel is available on Cydia from the BigBoss repo for $1.99. Check here for instructions on how to jailbreak iOS 7.x with evasi0n 7. You can also find out how to purchase and install Cydia tweaks with this guide.