Apple to Launch 'iOS in the Car' with Ferrari, Mercedes-Benz and Volvo Next Week

Ever since "Car Display" showed up in General -> Restrictions in some of the early iOS 7 beta versions we've known that iOS in the Car would be coming along shortly. Financial Times has now confirmed that Apple, in collaboration with Ferrari, Volvo and Mercedes-Benz, will be announcing its in-car operating system at next week's Geneva Motor Show. 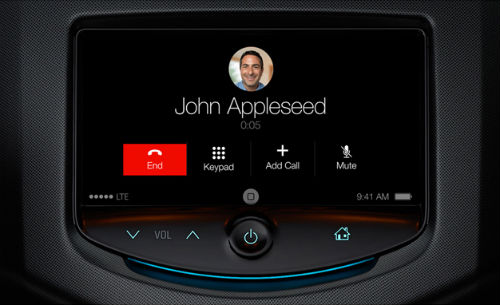 iOS in the Car will allow auto manufacturers to integrate iOS devices with their vehicles' native control systems, thereby allowing an operator to access iOS functions through his/her vehicle's interface. Initially, the focus will be on functions such as Siri, telephony, navigation, music control and messaging. This is just the

infancy of what is bound to be a massive evolutionary step for both smart devices and the automobile industry, that could culminate in vehicles being monitored or even controlled by a central computer. Suddenly Minority Report doesn't seem like the far distant future. Back to here and now, just about every auto manufacturer and a lot of the big technology companies, including Google, Microsoft, Apple and IBM are entering a period of intense competition for a market share in tomorrow's smart cars. Earlier this year, in his keynote address at International CES, Audi chairman Rupert Stadler described automobile connectivity as a "real mega trend" and said, "if mobility used to be about connecting places and people, it is now about connecting the driver with the car, the car’s surroundings, the traffic infrastructure, and all of the other connected elements of their life." He also said that connected automobiles will "become the largest social mobile devices we own." iOS in the Car is taking the first step in that direction.

Although next week's announcement only involves Ferrari, Volvo and Mercedes-Benz, many other manufacturers are expected to incorporate it in their vehicles in 2014, according to Financial Times. At last year's WWDC keynote, Apple Senior Vice President of Internet Software and Services, Eddie Cue, listed several manufacturers that had expressed interest in iOS in the Car, including Ford, Chevrolet, BMW, Nissan, Honda, Acura, Toyota and Hyundai among others.

tags:
News
iOS in the Car