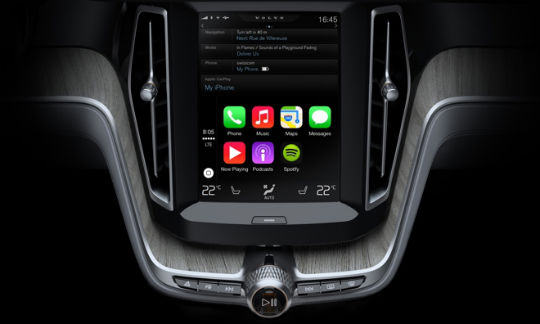 Apple Maps, music, messaging and phone functionality will now be available in their vehicle, accessible by voice, touchscreen or good old fashioned knobs and buttons.

A report last week indicated that Apple would be unveiling CarPlay at this week's Geneva Motor Show, in collaboration with Ferrari, Volvo and Mercedes-Benz. Shortly after CarPlay's announcement, Volvo unveiled its integration of CarPlay into its new XC90 SUV. The XC90 will feature a large touchscreen interface that will access both car features, such as climate control, and iOS features. According to Volvo Car Group CEO and President, Hakan Samuelsson, "iPhone users will feel completely at home in a new Volvo. We have created a wholly-integrated user experience in our large portrait-oriented touch screen that takes the in-car mobile device experience to a new level. That, coupled with the obvious driver safety benefits of an advanced voice control system like Siri, made Apple a perfect match for Volvo.” The company also released a video demonstration that shows the interface with apps such as Phone, Music, Maps, Spotify. Currently, integration requires a Lightning cable, but Volvo says Wi-Fi support is coming in the near future.

Along with Volvo, Ferrari and Mercedes-Benz, Honda, Hyundai and Jaguar will be implementing CarPlay in some of their models later this year. According to Apple, BMW, Chevrolet, Ford, Kia, Land Rover, Mitsubishi, Nissan, Opel, Peugeot, Subaru, Suzuki and Toyota are all committed to adding CarPlay to future models.