The 2014 World Cup has arrived. Starting tomorrow, soccer fans around the globe can follow their favorite teams in the Group stage and beyond. Following the world's largest sporting event from anywhere has never been easier thanks to mobile devices. There are a variety of free iOS apps that can help make sure fans don't miss any action.

Here are five top iPhone apps for the 2014 FIFA World Cup in Brazil. Not only will these apps provide live match scores and highlights, there's in-depth information and breaking news. Results and headlines from across the world of soccer (or football, as it's known by most of the world) are key features of some of these apps as well.

FIFA Official App - The official World Cup app from FIFA not only provides fixtures and live results, but fans can use the app to vote for Man of the Match in each game. Joining the Global Stadium makes it possible to share reactions to plays with friends, players, coaches and celebrities. FIFA includes information on the host country and details about players and teams.

The official app has been completely redesigned for iOS 7, with a pull-up Matches menu that swipes left and right to display scheduled matches and other information. In addition to the World Cup section, live results from elsewhere in the world of football and a FIFA Ranking are available. 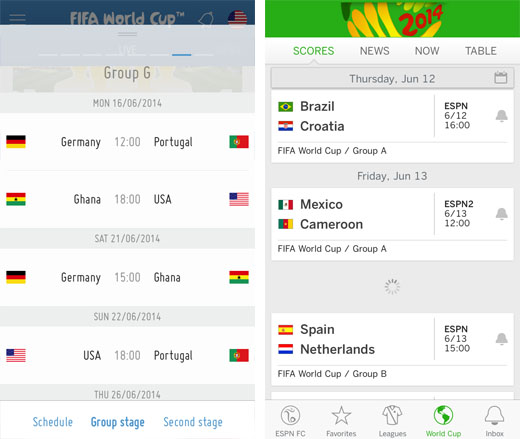 FIFA Official App (left) and ESPN FC
ESPN FC - ESPN's football club app has a special section exclusively dedicated to the World Cup. The menu option comes in addition to details and results from other clubs and competitions. ESPN is the exclusive FIFA Official US Broadcaster, so the app will have live match video highlights available moments after they happen. ESPN will also deliver analysis from key sports reporters who are in Brazil to cover the action.

For cable subscribers of ESPN, the app WatchESPN rounds out the experience with live feeds of the ESPN networks. Those in the US can watch live broadcasts of matches right on the iPhone.

World Soccer Finals - For straightforward live results and schedule information, this World Cup app does the trick. Users can track their favorite team at a glance, view standings and statistics, and view a map of the venues in Brazil. Calendar and notification features round out the package, which is focused on the matches themselves. 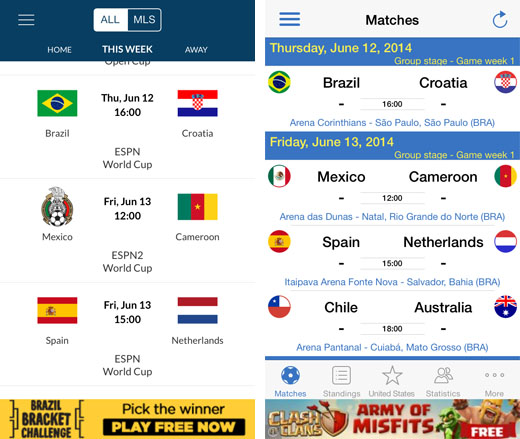 FOX Soccer 2Go - World Cup match information and news, as well as live scores and schedules can all be viewed with Fox Soccer. Subscribers to the channel through their cable provider can access additional live content, however in the US the official FIFA broadcaster is ESPN.

MLS Matchday - Last but not least, the official MLS app is updated with a dedicated World Cup news section as well as fixtures and live match details. As usual, details of MLS regular season games and other tournaments such as the Open Cup are also highlighted. Fans can participate in the Brazil Bracket Challenge along with 24 MLS players who have joined the fun.