To some consumers battery life is one of the most important features on a mobile device. Apple claims that the iPhone 6 and 6 Plus get up to 10 hours of internet use on LTE and up to 14 hours of talk time on 3G. If you are finding that your new iPhone is falling short of Apple's battery claims you may want to check the new battery usage tool found in iOS 8. Just navigate to Settings > General > Usage > Battery Usage and you'll find a list of apps and how much power they're each using. 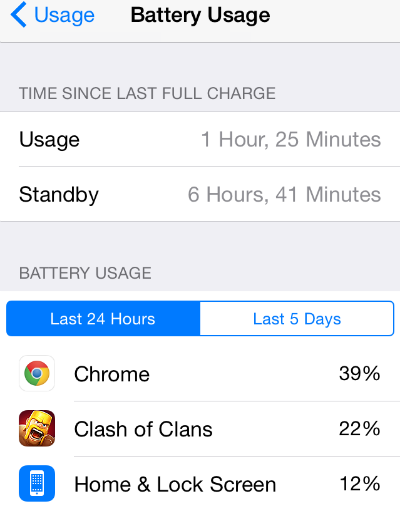 The battery usage tool shows you the apps that have used the most battery life in the last 24 hours or last 5 days. The knee jerk reaction would be to eliminate these power sucking apps, but just because they're at the top of the list doesn't meant they're evil battery killers. It just most likely means you use them a lot.

The battery usage tool is not only a great way to see what apps are draining your battery, but it can also show you how you're helping them drain your battery. For example, your battery may last a little longer at work if you stop playing Candy Crush and actually do your job. Don't blame the app for taking up 40% of your battery life if you're using it several hours a day. Apps need power to work. However, if you notice there's an app at the top of the list that you don't use that often then you may want to stop that app from running or delete it.

There are a lot of disputes on how to save battery life, for example some claim disabling features such as AirDrop and Siri will extend your time between charges, but now you have a tool that can actually help you decide if any apps are the actual problem. Just remember to use the tool wisely and don't blame apps that you enjoy just because like to use them. You'll only be punishing yourself in the long run.