Users will be able to list vital information on their Medical ID cards such medical conditions, allergies, emergency contact info and current medications they taking. 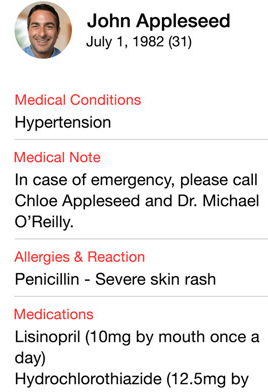 The HealthKit tool will allow developers to create apps that can access a user's Health app information with permission. For example, Apple cited Nike as one of the companies working on adding Heath app integration to their fitness apps. Apple also noted that the Mayo Clinic is developing software to help both doctors and patients interact in real-time by sharing information though their iOS devices.

Rumors have suggested that Apple added the Health app feature to iOS 8 because the company plans to announce its first wearable device nicknamed the "iWatch" later this year.

Samsung unveiled a similar feature called "S Health" when it launched the Galaxy S4 in 2013.