iOS 8 Tips: The Benefits of Sending a Voice Message

The evolution of the mobile phone is odd when you think about it. We went from wanting smaller phones to wanting larger displays, and we chose text as our preferred means of communication over video and voice calls. So why did Apple add the ability to send voice messages in iOS 8 if people are just going text each other anyway? Some would argue that Apple added voice messages because it is a popular feature on WhatsApp, BlackBerry Messenger and other third-party messaging services, but I like to think of it as the end of the dinosaur known as Voice Mail. 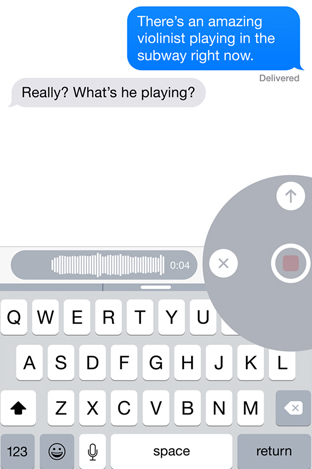 How many times have you had a text conversation where you said, "I can't explain this in text... I'm going to call you". Or how many times have you wanted to leave someone a message but didn't want to deal with the long process of calling them and leaving a voice mail? This is where a voice messages comes in. Thanks to iOS 8, iPhone users can now quickly record and send a voice message without the need to call someone.

Sending a voice message allows you to end an iMessage conversation without having to make a call, or it can help you send a message that's meaning may be lost in text. To send a voice text in the Messages app, just tap hold the new microphone button to record your message and swipe up to send it.

There are many uses for voice messages, like singing someone Happy Birthday instead of texting them, or sending a quick clip of your new guitar solo. Apple has also made it easier to take and send videos or photos within the Messages app, and to see every attachment from a conversation with just a simple tap.

The only downside to voice messages is it just got easier to leave a drunk recording that you will regret in the morning.