After a public beta that began in mid March, iOS 8.3 was officially released on Wednesday. It offers several new features, including a new emoji keyboard, and a plethora of bug fixes and improvements. If you are thinking about upgrading, beware that users have been reporting several bugs over the past few days. 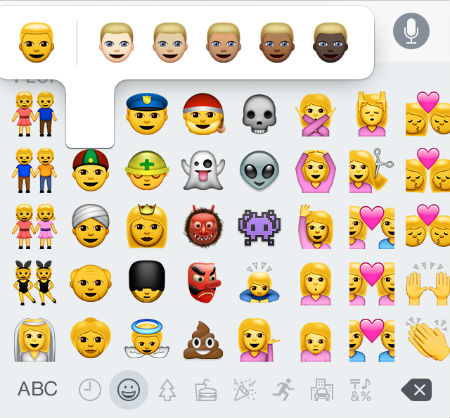 The most notable feature of iOS 8.3 is the new emoji keyboard that includes several hundred new emojis. The interface is different - you can now seamlessly scroll left and right through all of the emojis and tap category icons at the bottom to quickly skip through. You can also now change the ethnicity of the human emojis and there are many new symbols as well, including, of course, the Apple Watch.

Siri's voice has been improved in 8.3. It now sounds more natural with improved cadence. The difference is subtle but clear when you hear the old and new side-by-side. In addition, Siri has received several new languages including Danish, Dutch, Portuguese, Russian, Swedish, Thai and Turkish. You can also now ask Siri to make a phone call on speakerphone.

iOS 8.3 finally has gotten rid of the age old nuisance of having to enter your password in order to download a free app. Now there are password settings that let you toggle "require password" for free app downloads.

The update also gives you a new filtering option for messages that allows you to separate "contacts & sms" from "unknown semders." Helpful if you get a lot of spam messages.

Other features of 8.3 won't be applicable to everyone. With 8.3 you can wirelessly connect to CarPlay, you no longer need to connect with your lightning cable. 8.3 has also added support for Wi-Fi calls for Sprint and UK network EE subscribers. This has been available for T-Mobile customers since iOS 8 came out, and both AT&T and Verizon say it will be available on their networks later this year.

Aside from the above, iOS 8.3 comes with a bounty of bug fixes and other minor improvements. You can see the full list at Apple's site.

If you have updated and are experiencing any new bugs, or have found any fixes, let us know.