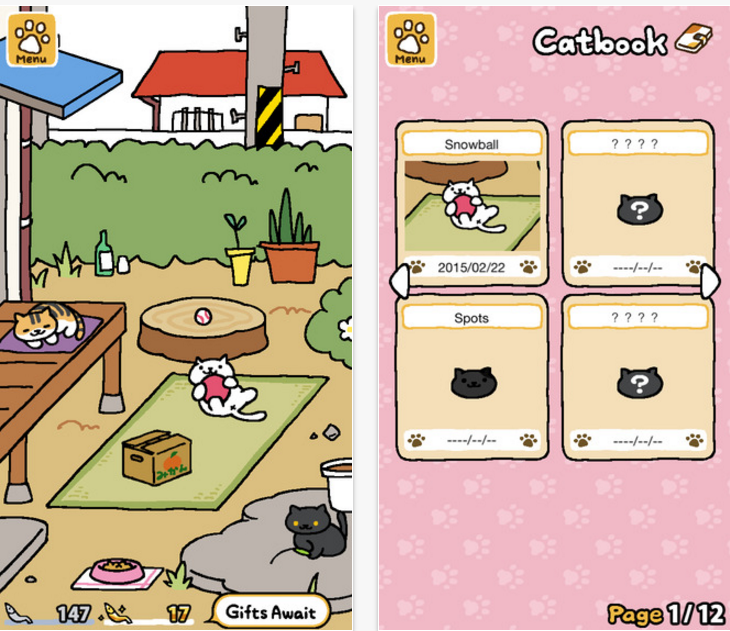 Neko Atsume is a "kitty collector" title where the goal of the game is to become a digital cat lady. The game was previously only available in Japanese but it has been recently updated with an English-language option. In Neko Atsume players can buy items like rubber balls, cat food and other cat luxuries known as "goodies" to attract cats to their yard. The game is a lot like Pokémon in that the object is to collect all the cats and add them to your Cat Book. There are all kinds of cats to collect including rare cats that take certain items to attract.

You can buy goodies by collecting fish that random cats leave behind or by purchasing gold fish as IAPs. You can also collect mementos and take photos of your cats then create an album to use as wallpaper on your device.

The game is easy to learn and simple to play. It also includes a tutorial in English so you don't have to try and figure out Japanese. You start off with 300 fish to fill your yard, but it takes a long time for the first round of cats to appear, so be patient. You can turn off the app and check back later to see what cats have visited your cat paradise.

Neko Atsume has also been updated with new rare cats for veteran players to collect. Version 1.4.5 with the new English option is now available for free on the App Store. The game supports all devices running iOS 6.0 or later.