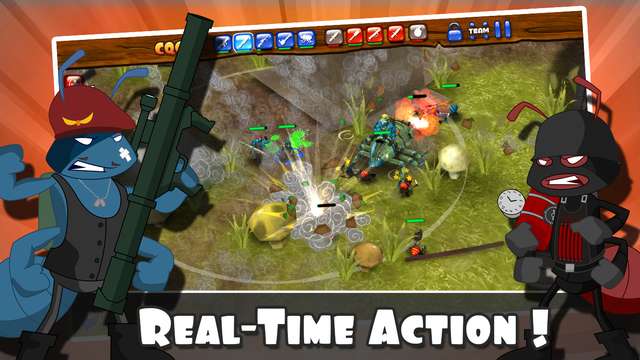 Army Antz is a new action strategy game inspired by the 90's classic General Chaos by Electronic Arts. For those too young to remember, General Chaos is a strategy game where players battle with different teams to capture their enemy's capital city. The game was originally released for SEGA Genesis in 1994. Army Antz follows the same game mechanics with teams of ants battling each other to dominate the park battlefield.

The game features 19 battle arenas, 13 battle Antz with their own unique weapons and real-time action. Players can use teams of 5 to attack their enemy's base and capture their flag. The game also includes support items to help your team get an edge in battle, 19 achievements to unlock and the ability to upgrade you Antz to become a stronger team.

Army Antz is available for $2.99 on the Apple App Store. It supports all devices running iOS 7.1 or later and it comes with four difficulty modes: Easy, Normal, Hard and Kamikaze. Users can also train their team and watch and share replays of their strategies.

The app is optimized for the iPad Pro and supports iOS 9 Split Screen mode on supported devices.