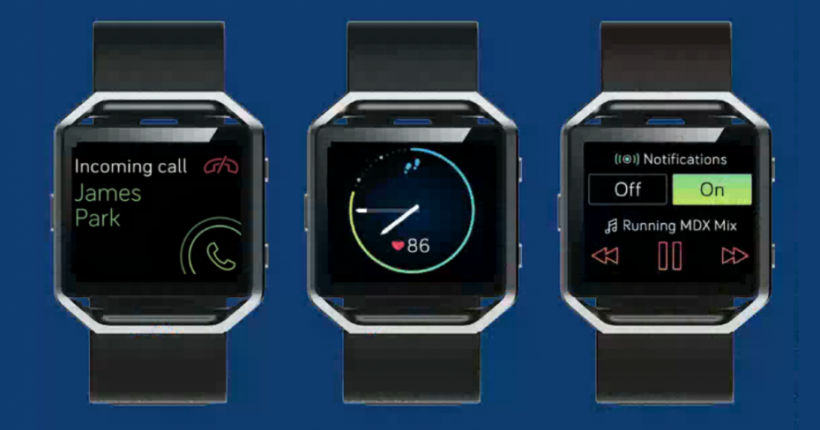 Fitbit today unveiled its new fitness watch called "Blaze" at CES in Las Vegas, Nevada. The Blaze is a performance watch that tracks and records activities such as daily steps, calories burned and more. The watch does not include its own app store like other smartwatches on the market, but it does ship with the guided workout app FitStar preinstalled. The watch also lacks GPS, but users can pull GPS data from their smartphone. The Blaze also tracks 15 different types of exercises and activities, such as "running, walking, tennis, basketball, soccer, and elliptical machine workouts," according to The Verge.

Other features include the ability to wirelessly share data with your iOS, Android or Windows device, a heart rate sensor, mobile notifications for texts, calls and more and the ability to adjust your music on your smartphone.

The Blaze and additional bands will be available starting in March. The watch itself will retail for around $200, and bands will start at $30 for the basic plastic offering. There will also be a $100 leather strap and $130 stainless steel option at launch. Here are the highlighted features from the press release.

The Fitbit iOS app shot to the top of the Apple App Store charts on Christmas Eve and Christmas Day suggesting a lot of people receieved a fitness tracker for the holidays. The Fitbit Blaze is Fitbit's attempt to compete with the upcoming launch of the Apple Watch 2 and other wearable fitness trackers while remaining one of the leading wearable device manufacturers.

Apple is expected to announce the Apple Watch 2 sometime early 2016.