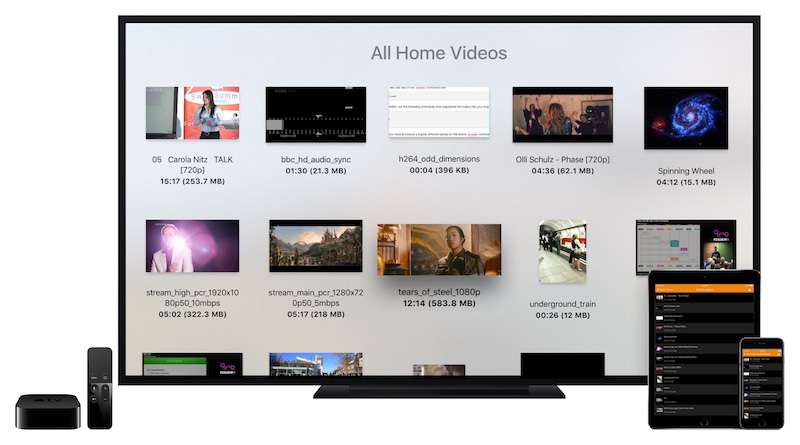 The Video LAN Organization has come one step closer to their motto, "VLC plays everything and runs everywhere". The first port of VLC media player for Apple TV has arrived on the App Store, promising to play almost any video stream or file in its native format. The announcement comes hot on the heels of a major update to the VLC for Mobile iOS app. Not only does VLC bring incredibly versatile video playback to Apple's latest app platform, the software adds several Apple TV specific features.

VLC is the only video player to support custom playback speed on the Apple TV. The app also includes Apple TV specific navigation, with chapter selection and multiple audio and subtitles track selection. Besides playback of virtually any video file format in existence, VLC has full 64-bit support, on-the-fly audio and subtitle track synchronization, and fine scrubbing controls. When it comes to streaming support, the list goes on with HLS, MMS, and RSTP streams supported; file server features include SMB, FTP, UPnP, and Plex support.

The fourth-generation Apple TV port of VLC was expected to launch in December. After a slight delay, the initial release is worth the wait. VLC is arguably the best video player in existence, and with improvements such as cloud integration with Dropbox, OneDrive and Box in the pipeline, it will only get better.

VLC for the Apple TV version 1.0.0 is free and open source, requiring tvOS 9.0 or later and 21.7 MB of storage space to install. See detailed VLC for Apple TV highlights or grab the source code directly from VideoLAN.