Apple Stock Weekly Outlook: AAPL is back on track 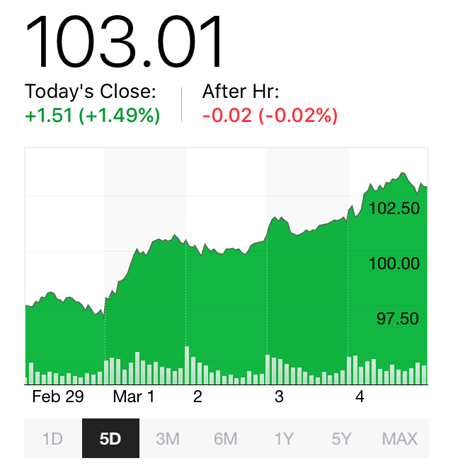 Apple stock (NASDAQ:AAPL) opened Monday at $97.14 and surged on Tuesday, closing over $100 for the first time in two months. After continuing to gain, share prices peaked Friday afternoon at 103.68 to finally close the week at $103.01. Overall, AAPL gained +$5.87 (+6.04%) on the week, outperforming the NASDAQ Composite. Analysts are generally bullish when it comes to recommendations. Here are some headlines that may affect AAPL over the coming months.

Apple can expect to add $5.5 billion in new sales this fiscal year thanks to the addition of an updated 4-inch iPhone release in March. The smaller form factor device will include Touch ID, Apple Pay and a Motion coprocessor for $500 or less. Likely named the iPhone SE or iPhone 6c, the device could sell 15 million units by the end of the year. Apple will also maintain its standard product refresh in September; the company will launch the flagship iPhone 7 and iPhone 7 Plus ahead of the holiday season.

Apple will increase dividend by 10% per year

CEO Tim Cook discussed dividends at the last shareholder meeting, stating that Apple would increase its dividend annually. Since the current dividend program started in 2012, Apple has paid $38.7 billion to shareholders. The company plans to increase dividends by around 10% per year, while continuing its stock buyback plan. AAPL recently increased its dividend to $2.08 per share in the June 2015 quarter.

Some rumors pointed to an iPhone 7 with an OLED display, however more realistic estimates of Apple's transition to the power-sipping, flexible display technology pointed to 2018. Now a Nikkei report indicates the move could come as early as next year. LG and Samsung have been contacted by Apple about OLED production, and Apple supplier Japan Display plans to mass produce the displays starting in early 2018. Incorporation of OLED in an iPhone 8 could make a curved display possible.

Looking forward, the bulls are back

Overall, a majority of AAPL analyst recommendations indicate a Strong Buy according to NASDAQ Stock Research. The 12-month consensus price target remains over $130, despite the fact that Apple stock has hovered under the $100 mark for the past several weeks. Apple's Price/Earnings Ratio is expected to increase slightly to 11.17 this year, beating the 2015 P/E of 10.93.