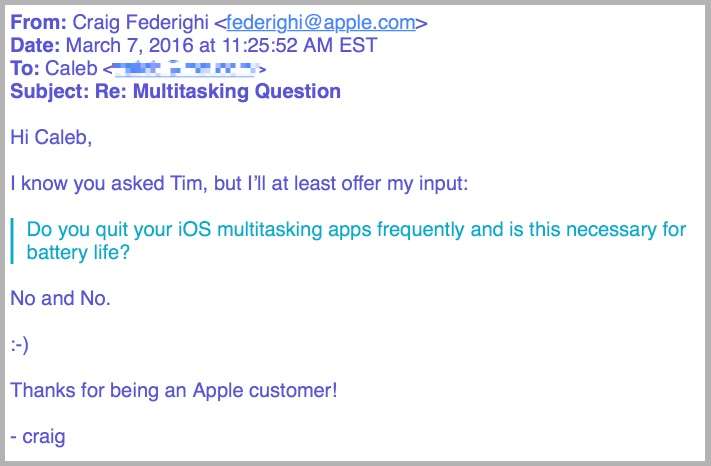 It has always been a popular belief that force quitting apps in the app switcher will help preserve your battery life, but Apple iOS chief Craig Federighi has finally put the rumor to rest. A 9to5Mac reader decided to ask Apple CEO Tim Cook via email, if he "quits his multitasking apps frequently and if this is necessary for battery life." Cook forwarded the email to Federighi who replied "no and no" thus ending the controversy.

iOS users can force quit apps by quickly double tapping their Home button and swiping away the app window. Closing out apps running in the background has always been thought to be a great way to preserve battery power, but it has also been long disputed that this technique actually works and it could instead be hurting your battery life. A former Apple technician told LifeHacker in 2014 that force quitting apps to improve your battery life is a waste of time:

"Yes, it does shut down the app, but what you don't know is that you are actually making your battery life worse if you do this on a regular basis. Let me tell you why."

"By closing the app, you take the app out of the phone's RAM . While you think this may be what you want to do, it's not. When you open that same app again the next time you need it, your device has to load it back into memory all over again. All of that loading and unloading puts more stress on your device than just leaving it alone. Plus, iOS closes apps automatically as it needs more memory, so you're doing something your device is already doing for you. You are meant to be the user of your device, not the janitor."

This has been reiterated many times by various Apple bloggers and finally confirmed today by Apple.

The force quitting feature in the app switcher is mainly for restarting apps that have become unresponsive or are experiencing some kind of glitch.