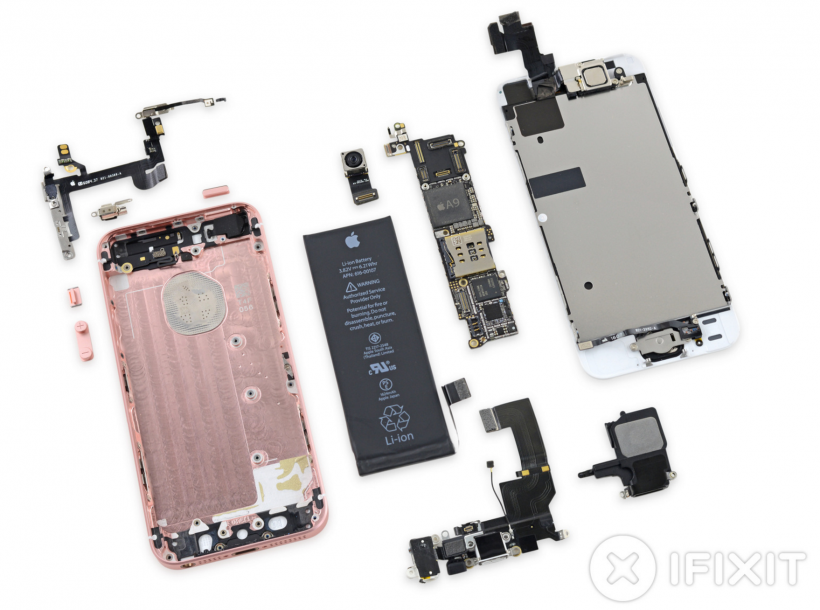 Chipworks: A combination of parts

The Chipworks teardown was first to reveal details on the iPhone SE's construction. The company explained that the iPhone SE "is not your typical Apple release." In any case, the A9 processor, 2GB RAM, NFC chip, and 6-axis sensor are all identical to those used on the iPhone 6s.

The modem and transceiver are found in the iPhone 6, and the touch screen controller is the same as Apple used in the iPhone 5s. Chipworks determined there are very few new components lurking inside the iPhone SE, however they explained that finding the "just-right balance of old and new, and at such a low cost, is no easy feat."

The complete iFixit teardown reveals an iPhone that is unsurprisingly similar in construction to the iPhone 5s. In fact, the iPhone SE shares the exact same display and Touch ID sensor, which can easily be removed once the pentalobe screws are taken out. This also means that iPhone 5s display assemblies can be used to repair the iPhone SE.

The iPhone SE also sports a slightly larger battery (1624 mAh) than the iPhone 5s (1560 mAh). iFixit summed up their teardown by giving the iPhone SE a repairability score of 6 out of 10 (10 is easier). Highlights making the iPhone SE repair easier are the accessible battery and the display assembly coming out first. Pentalobe screws and an easily breakable Touch ID cable are two reasons the score gets knocked down.

The teardown report from IHS adds estimates of component costs, which total $156.20 not including manufacturing. Since Apple used several parts found in older devices like the iPhone 5s and iPhone 6, prices for these components have dropped since they first made their way into the Apple supply chain. This helps keep iPhone SE costs down, allowing Apple to introduce an aggressive starting price of $399.

For comparison, the iPhone 5s was estimated to cost Apple $199 per unit when it launched in 2013. IHS expects many consumers to go for the 64GB model, which nets Apple an additional $89 of profit for each unit sold.