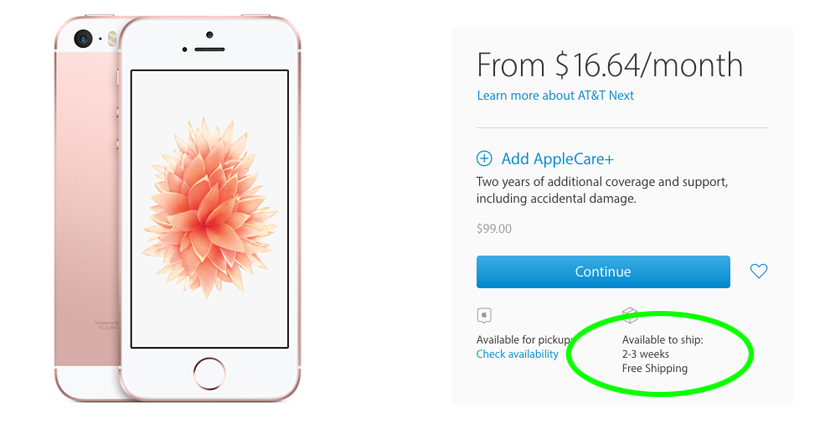 For weeks, Apple has offered 2-3 week shipping times on the iPhone SE. The situation continues, with the company trying to meet "very strong" demand according to yesterday's fiscal Q2 earnings call. Although Apple hasn't released sales figures, demand for the updated 4-inch iPhone is higher than anticipated. Apple is working to reduce iPhone SE shipping times, which are currently overnight for the iPhone 6s.

CEO Tim Cook explained, saying "We're thrilled with the response that we've seen on it. It is clear that there is a demand there even much beyond what we thought. That is really why we have the constraint that we have." The iPhone SE was designed to attract new customers to the Apple ecosystem, offering updated hardware at a lower cost.

The iPhone SE news comes as a bright spot in Apple's year-over-year revenue picture, which saw the company's first decline since 2003. Fiscal Q2 iPhone sales dropped from 61.2 million units last year to 51.1 million during the same time period in 2016. The iPhone comprises 65 percent of Apple's total revenue, and many Wall Street analysts are concerned about sales leveling off.

Despite the sad news, Apple raked in $50.6 billion in revenues for a profit of $10.5 billion. Gross margin remains around 40 percent. While these are not typically numbers that point to a struggling company, Apple share prices (NASDAQ:AAPL) lost over 5 percent, dropping below $100 on the Wednesday after the call. Apple will increase the dividend for shareholders from $0.52 to $0.57 per share.

The 4-inch iPhone SE starts at $399 with 16GB of storage, and runs $499 with 64GB. The SE offers the same external design as the iPhone 5s, with rose gold as an additional color choice. When it comes to hardware components, elements of the iPhone 6 and iPhone 6s are packed inside.