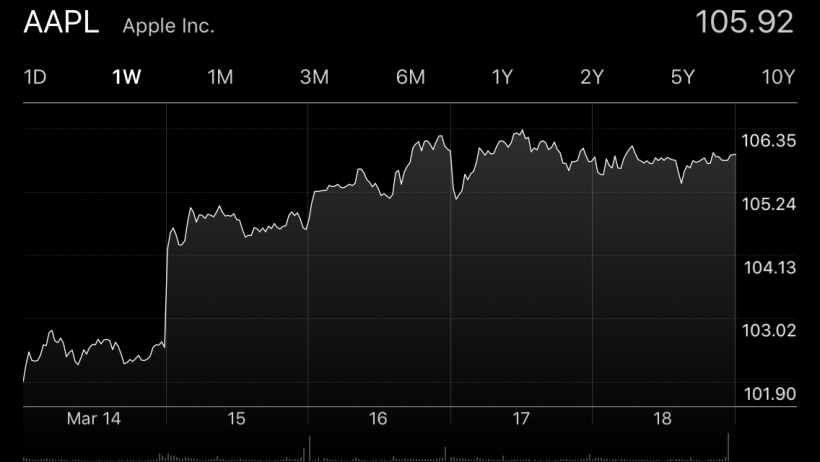 Apple (NASDAQ:AAPL) opened the week at $101.90 and continued its climb, peaking midday Thursday at $106.34. After slipping on Friday, Apple stock closed the week at $105.92 for a gain of $4.02 (+3.95%) over the five-day period. There is much anticipation for new product releases at today's media event, especially for the iPhone SE. This update to Apple's 4-inch iPhone is expected to boost iPhone sales around the globe. More headlines in the world of AAPL follow below.

Today is the big day, with Apple's media event kicking off in Cupertino. The keynote is likely to focus heavily on a refresh to the 4-inch iPhone 5s. According to reports, the new handset will be named the iPhone SE. The form factor will remain the same, while hardware will get an upgrade, using many of the components currently found in the iPhone 6s and iPhone 6.

Analysts are hoping that the iPhone SE fills a void, and boosts iPhone sales this year. The iPhone, which comprises the lion's share of Apple profits has been looking weak recently according to reports from the supply chain. Apple is also expected to reveal an updated 9.7-inch iPad as well as new Apple Watch bands and updates to iOS, tvOS and watchOS.

Anyone interested in watching the event live can now grab the Apple Events app on Apple TV, in addition to watching on a variety of desktop and mobile platforms.

While the expected 9.7-inch iPad refresh won't be official for a few hours, the latest iPad Pro to hit the lineup will likely carry a $599 base price. The price increase reflects the reality that iPad owners tend to hold onto their devices much longer than smartphones before upgrading. Increasing the selling price, and adding new features like those found in the larger iPad Pro indicate a different strategy for Apple in the maturing tablet market. In the past, Apple would keep the $499 base price with every new model.

As larger iPhone screens are cutting into already declining iPad sales, raising the profit per-unit by selling at a higher price could be the answer.

Apple has issued more debt, this time in three notes totaling $3.5 billion. The US dollar-denominated bond will cover costs for the AAPL capital return program, acquisitions, operational expenses and outstanding debt. The notes offer three different yields, with $750 million at 2.25% due in 2021, $1.25 billion at 3.25% due in 2026 and $1.5 billion at 4.65% maturing in 2046. The ongoing capital return program has paid $153 billion through the end of December 2015.

Katy Huberty at Morgan Stanley reported that supply chain revisions have hit bottom, with 40 million units in the pipeline for both the March and June quarters of 2016. The company also estimates that iPhone sales will hit 56.5 million units in the current quarter, an optimistic number compared other estimates. The analysis has helped buoy Apple's share prices over the past week.