Apple has filed patents indicating the company is working on "consumer abuse detection" for devices such as the iPhone and iPod. The system described in the patent filing shows circuitry that would record information whenever the hardware is treated in a manner that is not covered under warranty or Apple Care coverage. 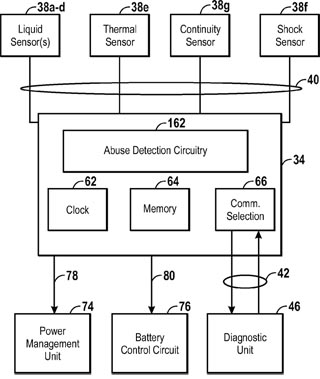 Shocks and impacts to the iPhone, exceeding the maximum safe operating temperature, and exposure to water are examples of events that could be recorded, along with any resulting damage to the device. During a warranty claim, the data could be retrieved to see if the device has been abused or is still covered.

Indicators that change color when they are submersed in water are already installed in iPhones. These help Apple technicians determine whether or not an inoperative device has been drowned, voiding the warranty.

Upon detection of abuse or damage, the iPhone would self-diagnose and take appropriate steps to limit further damage, such as shutting down the device until repair.

According to the patent:

It is not uncommon for consumers to receive replacement products or repair services on abused products not covered under the terms of a warranty. Such erroneous replacements or repairs may be costly to the vendor and/or manufacturer of the product.

So the next time you accidentally leave your iPhone in the freezer, drop it down the stairs, or dunk it in your friend's beer, be glad that Apple isn't recording the event... yet.

In the meantime, if you're looking for a warranty that actually covers accidental drops and spills, we recommend SquareTrade iPhone insurance.

Maybe all these new "sensors" could make the device more and more powerful.
Tell the current room temperature.
Read the actually humidity.

Why stop there. Use infrared to control your TV, CD, stereo, DVD, projector.

If you could design the next iphone... what hardware would you include?