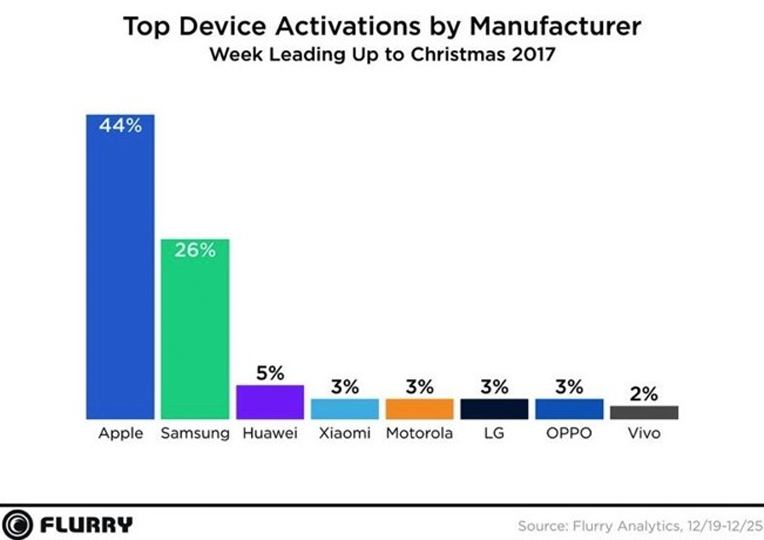 The week leading up to Christmas was a big one for Apple, with the company taking the global lead in new device activations. According to Flurry Analytics, 44 percent of new phone and tablet activations from December 19th to the 25th were Apple devices this year. Samsung took the second place slot with 26 percent of activations that week.

Flurry also broke down the top selling Apple devices for the week leading up to Christmas around the world. The iPhone 7 led the pack with over 15 percent of activations, with the iPhone 6 (14.9%) and iPhone X (14.7%)coming in second and third place respectively. Several older models of the iPhone including the iPhone 6s (12.6%) and iPhone 7 Plus (10.4%) outsold newcomers to the lineup such as the iPhone 8 (8.1%) and iPhone 8 Plus (8.7%). Older models are selling well in overseas markets, where they are often marketed as more affordable choices by third-party sellers.

The six device manufacturers following Apple and Samsung produce lower-cost Android devices and were lead by Huawei with five percent of device activations. The week leading up to Christmas gave Xiaomi, Motorola, LG and OPPO all three percent of global activations, with the remaining two percent going to Vivo. Notably absent was Google, despite the launch of their Pixel 2 smartphone.