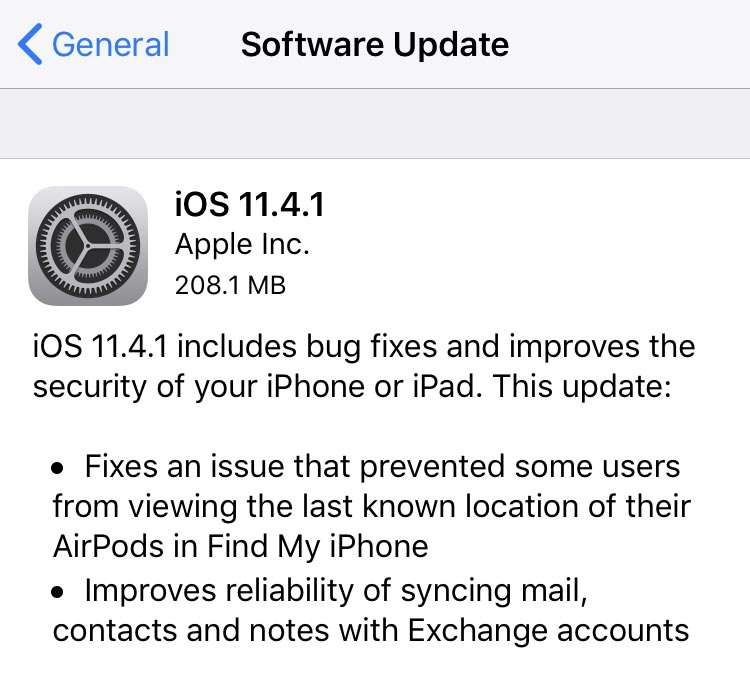 While most of the attention lately has focused on the iOS 12 beta releases, Apple has rolled out the latest version of iOS 11. The software update, iOS 11.4.1, is available for the iPhone, iPad, Apple TV and HomePod. Apple Watch owners can also update their devices now, by installing watchOS 4.3.2.

The latest iOS update is recommended for all users of iOS 11. The release deals with bug fixes, including a fix for a problem with Find My AirPods that has been experienced by some users. Syncing with mail, contacts and notes with Exchange accounts has also been improved. If your device has had any issues with these two items, installing iOS 11.4.1 should remedy the problems.

Don't expect any major changes in this update. Apple typically reserves minor updates for small tweaks and to fix bugs that come onto the radar during more significant software releases. In fact, Apple doesn't even detail what has been changed in watchOS, only stating the boilerplate line about improvements and bug fixes.

HomePod users can expect better stability and quality, just as those who update their Apple TV will see unspecified improvements. The update requires a Wi-Fi connection to download and install over-the-air (OTA) and weighs in at over 200 MB.