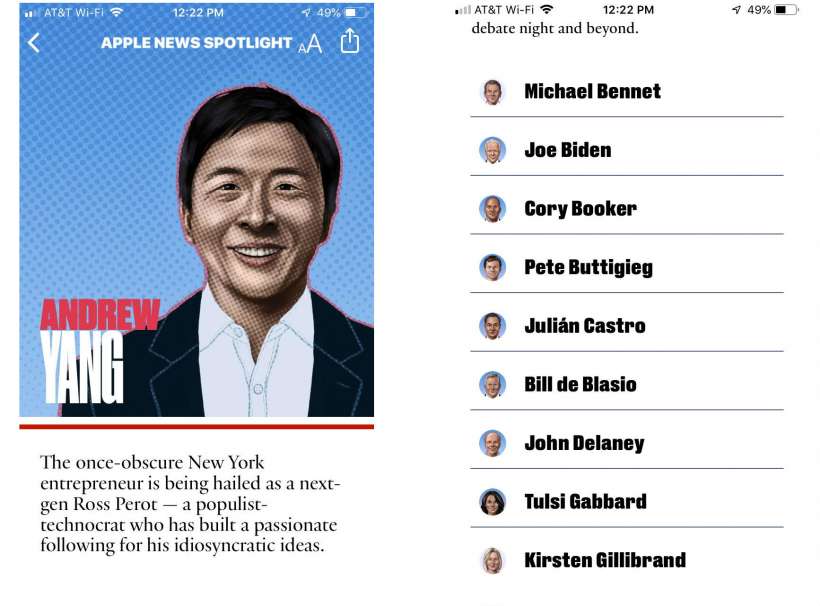 Apple has rolled out a new "Democratic Hopefuls" section in its News app to help voters familiarize themselves with the 20-plus candidates vying for the 2020 Democratic nomination. Things can feel a bit muddled with candidates ranging from Obama's VP, Joe Biden to the "socialist democratic" senator, Bernie Sanders. The Apple News Spotlight aims to provide voters a “robust and reliable” resource for the crowded Democratic field, according to Lauren Kern, Apple News editor-in-chief.

“The 2020 Democratic field is complex, and we want to offer Apple News readers a trusted place to learn more about candidates they’re familiar with and those they may be hearing about for the first time,” said Kern.

Each candidate is featured in his/her own profile with quotes, news links, and stances on key issues. The news content for each candidate is drawn from diverse sources such as ABC News, Axios, CNN, Fox News, Politico, The Hill, The New York Times and more.

The first 2020 Democratic debate is scheduled for tonight at 9 p.m. Eastern Time. It will be available on NBC, MSNBC and Telemundo, and livestream on both Twitter and YouTube. The first 10 candidates to take the stage (10 others will debate on Thursday) are:

Each candidate will have only 60 seconds to answer a question, and 30 seconds for rebuttals. Each candidate will give a 1-minute closing statement. The first debate is scheduled to end at 11 p.m., and will be broken up into five segments with 4 commercial breaks.