iOS 15.5 released with over 30 security fixes 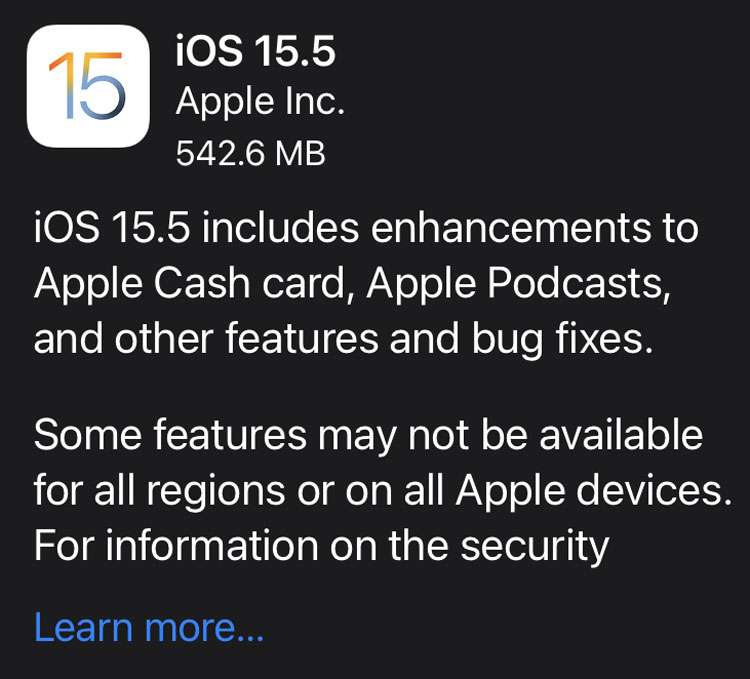 The day to update your iPhone is today. iOS 15.5 has dropped with over 30 security patches alongside the usual feature enhancements and bug fixes. With WWDC and iOS 16 beta coming soon, this may be the last version of iOS 15 to launch ahead of the annual event. For anyone running behind on updating their iPhone, now would be a great time to shore up security by installing iOS 15.5. As always, Apple provides the latest operating system to compatible devices at no extra cost.

iOS 15.5 can be downloaded on the iPhone 6s and later. Beware, your device must have at least 1.55 GB of storage available to successfully install the update. So why is updating to iOS 15.5 so important?

Apple has published an official document titled About the security content of iOS 15.5 and iPadOS 15.5, which lists the vulnerabilities that are patched by the update. Many of the fixes prevent execution of "arbitrary code with kernel privileges". The idea is to prevent malicious software from crashing apps or worse.

Of course, there are other reasons to update to iOS 15.5. As Apple explains:

Also in the Wallet app, iTunes Pass has changed its name to Apple Balance. Apple Balance continues to show what currency is linked to your Apple ID account for spending in the Apple ecosystem.

Overall, visible changes in iOS 15.5 are minor. The most important parts of this release are the security fixes for Phones, iPads, and other devices such as the Apple TV.