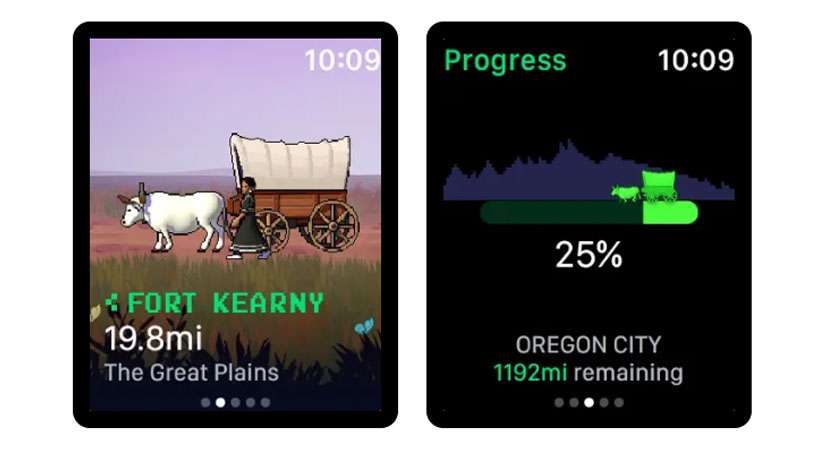 The Oregon Trail video game has a new incarnation on Apple Watch. This stand-alone step tracker is a fun way to see just how far your real-world steps would get you on the trail. While you can't tap the space bar to shoot at fauna, the Apple Watch-only title traces your progress each day by linking with Apple Health. Each section of the trail appears on the Apple Watch along with statistics and trivia.

The number of steps walked each day sets the pace for tackling the trail, from steady to strenuous to grueling. Since the Oregon Trail spans over 2000 miles, it can take more than a year to complete the game by walking 10,000 steps per day. The Apple Watch app can also track distance traveled when running or pushing a wheelchair. Gameloft has launched the step tracker as a free Apple Watch app in conjunction with its Apple Arcade title The Oregon Trail. To play the full game, a subscription to Apple Arcade is required.

The Oregon Trail was a popular game in elementary schools from the mid-80s to the early 2000s. The game features 64 real-life settlements, natural landmarks, and other locations that were encountered by travelers from Independence, Missouri to Oregon City, Oregon in the early to mid-1800s. The Apple Watch version simplifies the five legs of the journey by reducing the experience to counting steps. However, there are a variety of trivia cards to unlock, which deliver information about each section of the route.

Experience the journey to Oregon anywhere with the Apple Watch. Developed by Gameloft as a standalone StepTracker of the multi-award-winning Apple Arcade title. Now with 99.99% less dysentery.

Progress in the app is saved to the Apple Health app, and must be linked to health data for step tracking. In fact, the app does not work properly unless given permission to write information to Apple Health. Gameloft does not collect any data from The Oregon Trail: StepTracker.