The @dreamjailbreak rickroll is why you shouldn't even consider JB claim til there's non-debunked video, or surprise release..not hype

DreamJB was intended as a social experiment. In the matter of a mere week, over 20,000 people followed this Twitter.

The jailbreak community anticipated the greatest Rick Roll in internet history, but they got a dodgy jailbreak video instead. An unknown hacker calling himself "Dream JB," promised the world he would deliver an untethered iOS 6 jailbreak for all current iOS devices on December 22. The jailbreak community instantly smelled scam since he is not associated with any known dev team, and has chosen to remain anonymous. To prove he's legit, Dream JB promised video proof today that his jailbreak does work. After a long day of hilarious tweets calling him a fake, Dream JB delivered the first of two videos showing off his mysterious Dream Jailbreak.

There are already hundreds of YouTube comments questioning the authenticity of the video, and the well known iOS hacker chpwn already called it a fake on Twitter:

@DreamJailbreak Nice try, but aren’t you supposed to make the fake at least somewhat believable? It’s more fun when it’s not so obvious.

@DreamJailbreak (A tip: iOS boots to the lock screen, not the home screen. You only get that animation by exiting an app made to fake it.)

A mysterious and unknown hacker calling himself (herself?) "Dream JB" is promising to release an untethered iOS 6 jailbreak for the iPad mini, latest iPad and iPhone 5 on December 22. Dream JB is not associated with any known dev team, and has said he will deliver video proof of the jailbreak via Twitter on Wednesday. If true, the new untethered jailbreak will support all current Apple devices running iOS 6.0.1. This includes the iPhone 3GS, iPhone 4, iPhone 4S, iPhone 5, iPad 2 and beyond, iPad Mini, iPod Touch 4th generation and beyond. 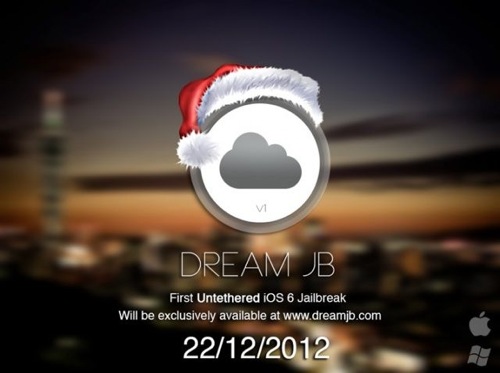